Bengaluru, May 15: History was created at the Impact Arena in Bangkok on Sunday as India defeated 14 times champions Indonesia to clinch their maiden medal at the prestigious Thomas Cup.

After India secure their medal with a 3-2 win over Denmark in the semifinals, the men's team show pure grit and determination to lift the gold medal in their maiden final appearance. 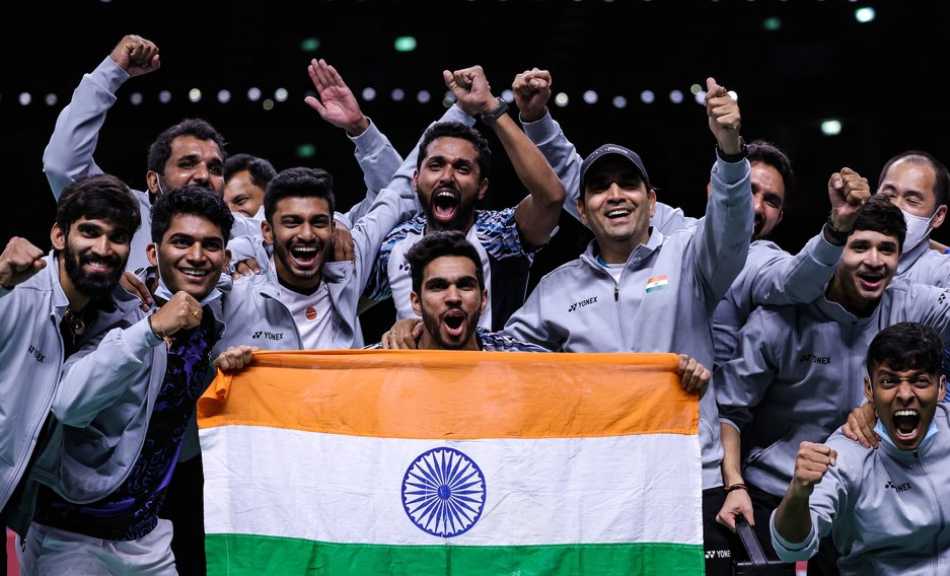 Taking on current holders and record champions Indonesia in the final, the Indian men's team got off to a winning start with Lakshya Sen winning the first match of the day. Satwiksairaj Rankireddy and Chirag Shetty gave India a 2-0 lead before seasonod campaigner Kidambi Srikanth wrapped up the win for India with an unassailable 3-0 lead.

In the first singles match of the day, the young Lakshya Sen fought back to guide India to 1-0 over Indonesia. After a listless first game, Sen bounced back to defeat Indonesian shuttler Anthony Sinisuka Ginting.

The second match of the day was the men's doubles match. Indian doubles pair Satwiksairaj Rankireddy and Chirag Shetty fought hard but lost the opening game against Mohammad Ahsan and Kevin Sanjaya Sukamuljo. But the Indian pair bounced back to register a 18-21, 23-21, 21-19 victory over Ahsan and Sukamuljo. The one hour 13 minute contest saw India take a 2-0 lead over Indonesia.

Playing in the third match of the day and the second singles game, Kidambi Srikanth downed Jonatan Christie 21-15, 23-21 to guide India to a historic win, with two matches to go. In a 48-minute contest, Srikanth outplayed Christie in the first game 21-15. The second game was a well-fought, with the game tied 21-21. Srikanth defeated the Asian Games gold medallist in straight games as he wrapped up the match to guide India to a 3-0 win over Indonesia.

India wrapped up the win with two matches yet to be played - including the - men's doubles game between Indian pair MR Arjun and Dhruv Kapila and Indonesian pair Fajar Alfian and Muhammad Rian Ardianto, and the men's singles between HS Prannoy and Shesar Hiren Rhustavito.

India became the sixth different nation to clinch the Thomas Cup. Congratulating India on their historic win, PM Narendra Modi tweeted, "The Indian badminton team has scripted history! The entire nation is elated by India winning the Thomas Cup! Congratulations to our accomplished team and best wishes to them for their future endeavours. This win will motivate so many upcoming sportspersons,"