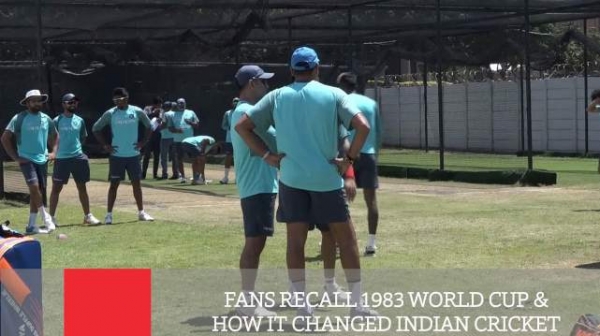 Bengaluru, June 25: Today is June 25. The date remains a golden one in the annals of India's cricketing history. It was on this day in 1983 that India had lifted their first-ever World Cup in cricket.

The feat was achieved under the leadership of Kapil Dev and the opponents in the final were the mighty West Indies, who were just looking for a hat-trick or crowns. India had won a low-scoring final at Lord's by 43 runs by bowling out the Caribbeans for just 140 after scoring 183.

After two disappointing outings in the 1975 and 1979 editions, India were hardly in the reckoning in the third. However, a 24-year-old Kapil was determined to do something different and in the very first game against two-time champions West Indies at Old Trafford, India won by 34 runs.

India had a 2-2 win-loss record when Kapil's heroics won them a game against Zimbabwe and they did not lose a match again in the tournament, beating Zimbabwe, Australia, England in the semifinal and finally the Caribbeans.

In the final on June 25, 1983, West Indies captain Clive Lloyd had won the toss and sent India to bat first even though he had won the two finals in 1975 and '79 batting first. His bowlers did a fine job in skittling India out for 183 with opener Krishnamachari Srikkanth top scoring with 38.

But after the interval, India's bowlers too showed their mettle and a brilliant backward catch from Kapil to dismiss the legendary Viv Richards helped their cause. The formidable West Indies batting line-up crumbled and they fell much short of the target. Mohinder Amarnath was adjudged the man of the match even though Madan Lal had played a huge role with the ball.

Incidentally, this June 25 also sees a World Cup match to be taking place at the same iconic Lord's and it is between old rivals England and Australia.

It is a very crucial league game for the hosts after their shock defeat to Sri Lanka while for the holders Australia, it is a less pressure situation as they are sitting at the top of the points table at the moment.