Fairytale finish for debutants Gujarat Titans and the Indian Premier League finally has a new champion! Playing in their debut season, Titans, who had become the team to beat in the league stage, clinched the IPL trophy, as they defeated inaugural champions Rajasthan Royals by 7 wickets at the Narendra Modi Stadium. 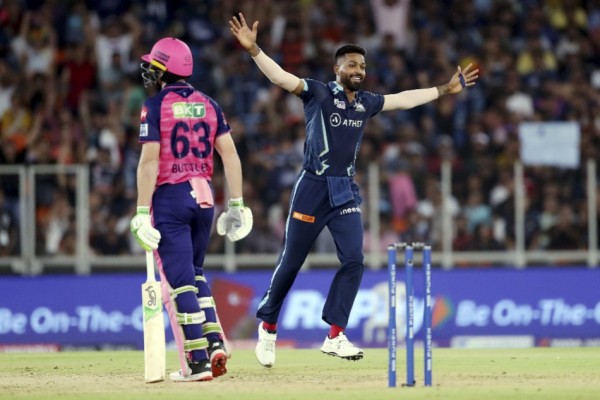 Playing in front of their home crowd for the first time, it was skipper Hardik Pandya who led from the front to guide Gujarat to the title. Pandya, who has four IPL titles with Mumbai Indians, picked up his first as a skipper.

After being sent into bat, Hardik first led the bowling attack turning in a stunning spell of 3/17. Not only did Pandya bowl at a superb economy of 4.25, but the Titans skipper picked up three crucial wickets.

In reply, Gujarat had a slow powerplay, losing two early wickets and scoring just 31 runs from the first six overs. But Pandya (34 off 30) and opener Shubman Gill put up a third wicket stand of 63 off 53 to keep GT on course for a win.

David Miller (32 off 19) and Gill (39 off 42) finished it off for Gujarat as Titans were crowned IPL champions in front of their home fans. Needing four from 12, the crowd was in its feet as Gill finished it off with a six to ensure that a new name will be carved on the trophy.