Bangladesh came from behind to eke out a slender one-wicket win over India in a nail-biting encounter in Mirpur to go 1-nil up in the three-match series. 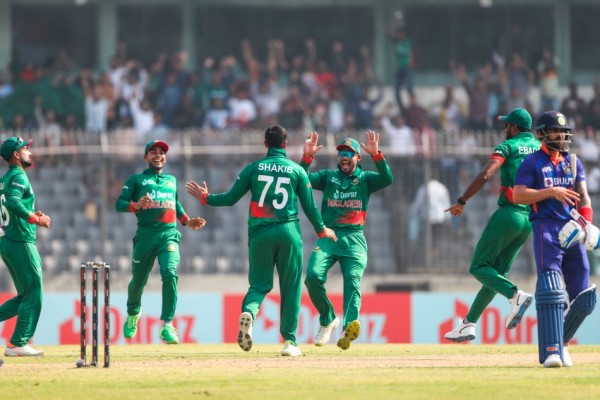 Defending a paltry 186, Indian bowlers put up a brave effort on a slow surface at Sher-e-Bangla National Cricket Stadium but they failed to get the final wicket as the last pair of Mehidy Hasan Miraz and Mustafizur Rahman shared a stand of 50-plus runs to deny Indians the last laugh.

Credit goes to Mehidy Hasan Miraz as the all-rounder scored a 39-ball 38 and ensured the hosts secured a sensational win in front of a hysteric crowd.

Indian bowlers triggered a collapse of Bangladesh after picking up the wicket of a set Litton Das. The hosts thus lost 7 wickets for 62 runs since then but the pair of Mehidy Hasan and Rahman ensured their team reached home.

Earlier in the day,&nbsp;Put in to bat first, India were bundled out for a paltry 186 in 41.2 overs. KL Rahul (73) top-scored for the visitors and anchored their innings after the top-order collapsed.

Except for Rahul, no Indian batter lived up to the expectations as they failed to post a decent total on the board.

Indian batters have a lot to ponder upon in the next game for a loss will mean a series defeat.