Manchester, July 17: Rishabh Pant set the stage on fire with his sensational maiden century as India clinched the ODI series 2-1 over hosts England at the Old Trafford Cricket Ground in Manchester on Sunday.

The bowlers, who have been stellar throughout the series, once again put up a solid show to bowl England out for 259, before Pant and Hardik Pandya took the game away from the hosts with a match-winning fifth-wicket partnership. 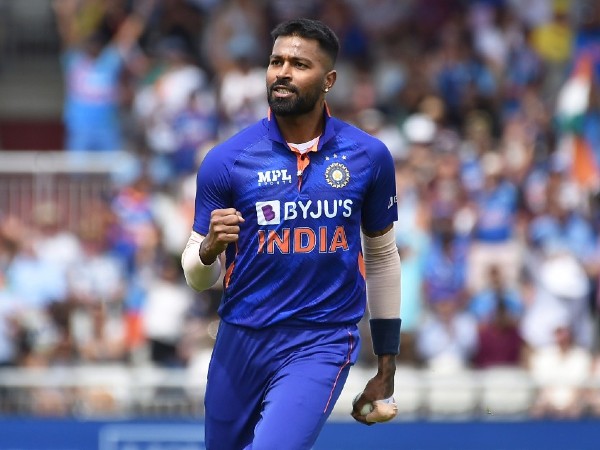 Two players took the centrestage for India in the third ODI in Manchester. While Hardik Pandya led the way with the ball, picking up four wickets, the all rounder then went on to score a scintillating knock with the willow along with Pant, who remained unbeaten on 125 to take India home in style.

With this India won both the T20I and ODI series in England.

With the series level 1-1, Rohit Sharma won the toss and once again elected to bowl first against Jos Buttler-led England.

Being invited to bat, opener Jason Roy handed the hosts a cracking start as he hit Mohammed Shami for three boundaries in the first over, to score 12 off the first over. Mohammed Siraj, opening the attack with Shami, pulled it back for India as he bowled a superb first over.

Siraj, who came into the side in place of Jasprit Bumrah - out due to a back spasm, bowl a wicket maiden as he picked up two big wickets. Siraj first handed India the big wicket of opener Jonny Bairstow (0) and Joe Root (0) was quick to follow him back to the dugout.

After losing two quick wickets, Roy and Ben Stokes steadied England's innings as the pair added 54 runs off 47 deliveries for the third-wicket. The duo looked set for a big stand, before Hardik Pandya came into the attack to hand India a breakthrough.

Four wickets down, the hosts pushed Moeen Ali up the order to No. 6 and maintains the left-right combo.

As Ali and skipper Jos Buttler attempted to rebuild England's innings, Rohit brought Yuzvendra Chahal into the attack in the 18th over and the previous game's hero got off to a good start as he conceded just two. Joining Chahal in the attack was double-wicket maiden hero Siraj.

But skipper Buttler frustrated the Indian bowlers as he along with Ali, put up a fifth wicket stand of 75 off 84. Captain Rohit brought Ravindra Jadeja into the attack in the 28th over and the bowling change worked as Jadeja broke the partnership.

Jadeja struck in his very first over as Rishabh Pant picked him up on the leg side to hand India an important wicket and reduce to England to 149/5 in 27.2 overs.

Captain Buttler kept the scoreboard ticking with his patient innings. The England skipper brought up his half-century off 65 deliveries in front of his homeground as he kept England on course for a solid total.

Pandya kept the hosts in check as he removed Liam Livingstone for 27 off 31 to reduce England to 198/6 in 36.2 overs. Livingstone's wicket made way for David Willey - who top-scored for England in the previous game.

Willey, once again added crucial runs for England as he along with Craige Overton defied the Indian bowlers to put up an eighth with stand of 48 off 41. But Chahal handed the visitors the important wicket of Willey as Suryakumar Yadav picked him up at long-off. Willey departed after a quickfire 18 off 15.

Overton's quickfire 32 off 33 lifted England past the 250 mark, before Chahal came back to finish off the tailenders. After removing Willey, Chahal finished off England's innings, removing Overton and Topley in the same over.

As Hardik Pandya led the attack with 4/24 and Siraj pocketed three, along with Chahal's three, the Indian bowlers put the visitors on top as they restricted England to 259 in 45.5 overs.

Needing 260 to win, Reece Topley once again troubled the top-order as India was quickly reduced to 74/4.

Pandya and Pant then stitched on a match-winning fifth-wicket stand. The duo added 133 off 115 as they put the visitors in command. While Pandya struck a scintillating 71 off 55, Pant clinched his maiden ODI century with a sizzling unbeaten 125 off 113.

Pant finished it off in style as he hit Willey for five consecutive fours before a reverse sweep off Joe Root to chase down the target with 47 deliveries to spare.

With the win, India ended the England tour on a smashing note, winning both the T20I and ODI series. While Pant picked up the man-of-the-match award, all round Pandya was adjudged player of the series.