Visakhapatnam, Oct 5: Rohit Sharma struck 127 while Cheteshwar Pujara scored 81 as India declared their second innings at 323 for 4 leaving South Africa with an improbable victory target of 395 on the fourth day of the first Test.

After scoring 176 in the first innings, Rohit smashed 127 off 149 balls, adding 169 for the second wicket with Pujara. Rohit's innings had 10 fours and seven sixes while Pujara hit 13 fours and two sixes. 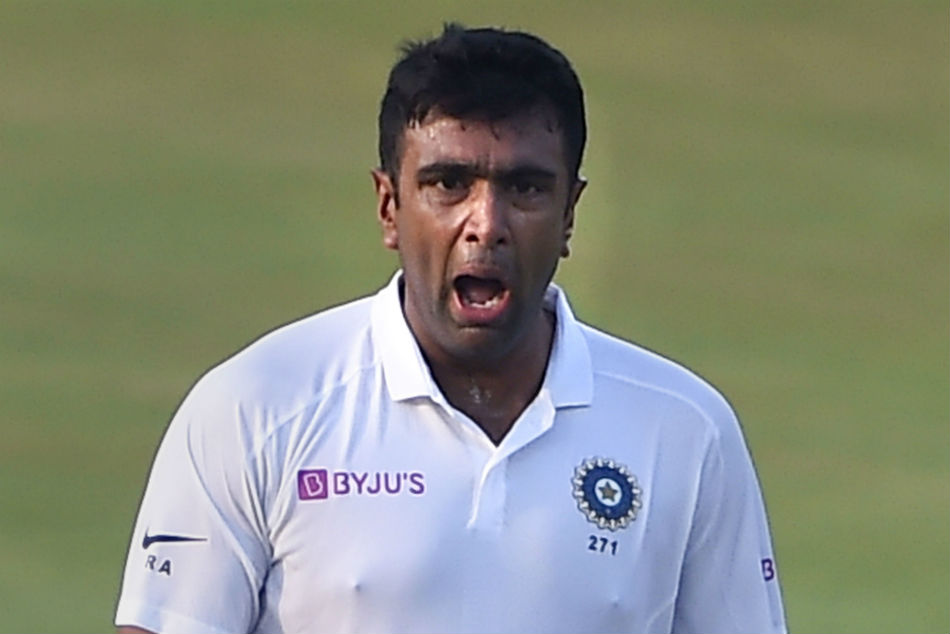 Ravindra Jadeja (40 off 32 balls), skipper Virat Kohli (31 no off 25 balls) and vice-captain Ajinkya Rahane (27 no off 17 balls) also threw their bats around to beef up the total. 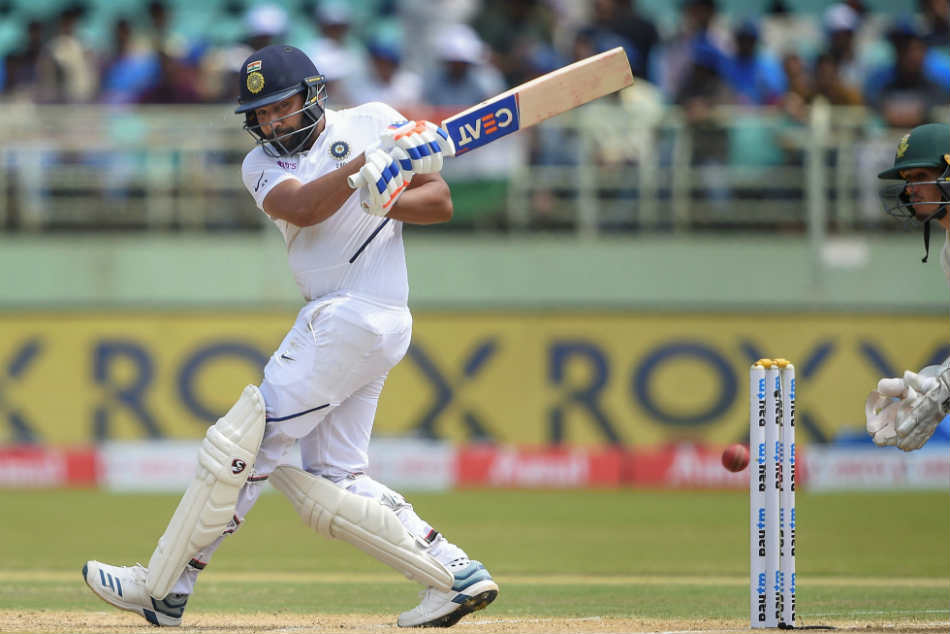 In response, the visitors lost Dean Elgar - the centurion from the first innings - cheaply. Elgar was batting at 2 when Jadeja trapped the southpaw in front but the hosts had to review the appeal to claim the wicket as the umpire had turned down their appeal. 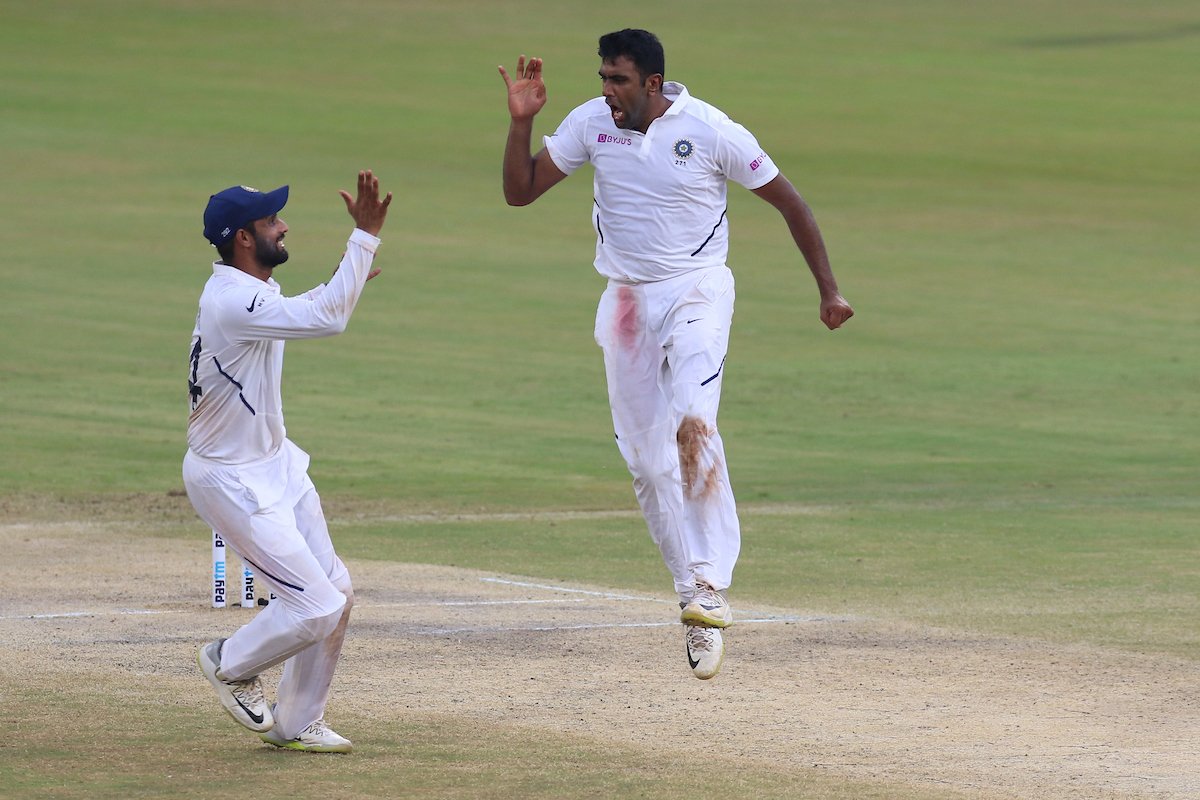 The tourists reached 11/1 at stumps in 9 overs. They are still 384 runs short of the target. India, on the other hand, need another 9 wickets to win this match. Aiden Markram (3*) and Theunis de Bruyn (5*) will resume innings for their team on the final day as the tourists would be aiming to salvage a draw.

Here's how the fourth day panned out:

OUT!! Big LBW appeal against Elgar from Jadeja. The umpire isn't impressed. Kohli goes upstairs The ball-tracking goes in India's favour. Jadeja was spot on. Elgar departs for 2. SA - 4/1

Only spinners are allowed to bowl!

The artificial light starting to take over. The umpires have said that fast bowlers cannot bowl.

Jadeja bowls the second over.

Final innings of the match! South Africa openers Aiden Markram and Dean Elgar are in the middle to begin run chase. Ashwin starts with the new ball.

SIX!! Ajinkya Rahane plays it inside-out and the ball sails over covers for a maximum off Maharaj Excellent shot from the vice-captain.

SIX!!! Sir Jadeja goes big as he hits Peidt over long-on for a maximum. Runs are flowing for the hosts at the moment

SIX!! Virat Kohli hits Maharaj over mid-on for a maximum. Four!! He then follows it up with a beautiful cover drive.

When your opponents congratulate you for an inning well batted!

Four! Brilliant cover drive from Virat Kohli against Maharaj and the ball races towards the fence.

Wicket! Rohit Sharma (127) gets dismissed in exactly the same fashion he was dismissed in the first innings i.e. stumped by Quinton de Kock off Keshav Maharaj. India - 239/3 in 56.5 overs.

SIX, SIX, SIX!! Hat-trick of maximums from Rohit Sharma and he claims record of hitting most sixes in a match (13). Surpasses Wasim Akram's record of 12 sixes.

Most sixes in a Test

Rohit Sharma becomes first batsman in history of Test cricket to score 2 centuries in a match when opening for the first time.

Century! Back-to-back century for Rohit Sharma in this match. This is his fifth Test ton.

Indian players with 100s in each inngs of a Test

200 up for India with a boundary through a cover drive from Rohit Sharma. He moves on to 98*.

SIX!! Ravindra Jadeja dispatches Mutthusamy into the stands on the third ball he faces and gets off the mark in style.

Surprise! Ravindra Jadeja has been sent in to bat, clearly the skipper wants him to score at a brisk pace.

If Jadeja has come ahead of Kohli, he has to go after every ball because Kohli could have scored at a reasonable rate too. I get the feeling Kohli wants a few overs at SA this evening.

Wicket! Cheteshwar Pujara's knock comes to an end for 81. He misses a well-deserved ton and Philander breaks the 169-run partnership. Even DRS couldn't save Pujara. India - 190/2 in 51 overs

This match has witnessed a lot of sixes and credit for the same goes to Rohit Sharma.

Most sixes by a team in a Test:

SIX!!! Pujara pulls Dane Peidt and gets a maximum. This is the second six of his innings.

The partnership between Rohit and Pujara is worth 150 off 232 deliveries.

Pujara gets a couple of boundaries as the ball, on both the occasions, went between the wicketkeeper and slip cordon. India - 138/1 in 41 overs, lead Proteas by 209 runs.

This time it’s Rohit not Virat....if you know you know 😂

Fifty! Cheteshwar Pujara gets a boundary off Rabada and reaches his 21st half-century in Test cricket.

Rohit against Maharaj in this game!

SIX!!! Cheteshwar Pujara too has taken the leaf out of Rohit Sharma's book as he pulls Peidt over mid-wicket for the maximum and moves into 40s. This was 12th maximum for Pujara in Test cricket.

Rohit Sharma brings up his 11th Test fifty. The opener - who slammed 176 in the first innings - took 72 deliveries to this half-century.

50+ score in most consecutive Test innings in India

Lucky! Pujara completely misses the turning delivery from Piedt, even the wicketkeeper fails to collect it and misses a stumping opportunity. The ball races towards the fine-leg boundary.

de Kock having a testing time behind the stumps — including a missed chance — past half hour or so suggests pitch getting increasingly tricky. India would still want 280-plus in the kitty to be confident. Some adventurous batting needed!

India reach 63/1 after 26 overs and lead SA by 132 runs. Their batters will have to score at a better pace and even keep their wickets intact.

India have twin objectives. Ensure against losing too many wickets and getting a move on to give the bowlers enough time on a slow surface. Slowly that objective will veer towards setting a target. Expect the run-rate to pick up now.

SIX!! Rohit walks down the ground and hits Dane Piedt over his head for a maximum. Four!! Rohit follows it up with a boundary down the fine leg region on the next delivery and takes his team's total past 50.

Lunch! India - 35/1 in 14 overs, they lead South Africa by 106 runs. This session also seems to have been drawn between the two teams.

SIX!! Rohit Sharma hits Keshav Maharaj over mid-wicket for his second maximum of this inning. India - 32/1

SIX!! Rohit responds with a maximum.

Not Out! SA went upstairs for the stumping appeal against Rohit. But his foot was just in time. Survives!!

SA's performance in the first innings in Asia.

South Africa in Tests in Asia (In the First Innings)

2nd innings! Indian openers Mayank Agarwal and Rohit Sharma are in the middle to start innings. Vernon Philander starts with the new ball.

WICKET!! Ashwin gets Rabada LBW for 15. But he had to review it to get the result in his favour. SA all out for 413 in 131.2 overs, trail India by 71 runs. Ashwin returns with 145 for 7. Indians bowled 14 overs today to get the remaining two wickets. Some grit and determination was shown by SA batters in Vizag.

India tried six bowling options....Ashwin took seven wickets. If this doesn’t re-establish his importance for this team at home, nothing will. #IndvSA

Another bowling change for India! Ishant Sharma has been introduced by Kohli with the hopes of getting a wicket and wrapping up SA innings.

4,4! Back-to-back boundaries for Rabada off Ashwin. The partnership for the 10th wicket is now 30 and the hosts are looking frustrated with SA's tail-enders.

Ashwin two wickets away from another milestone. But he'll have to wait for that one till the next innings because SA are already 9 down.

R Ashwin is two wickets away from registering 350 wickets in Test matches. Since his debut in Nov 2011, only Nathan Lyon (355) has taken more wickets. Ashwin has 27 five-wicket hauls to his credit, only Herath (28) has taken more in the timeline. #INDvSA pic.twitter.com/nLMe7KPijd

India go upstairs to review the close LBW call against Rabada off Ashwin. The ball-tracking ruled in favour of the umpire with 'Umpire's Call'. DRS Retained.

Bowling change! Ravindra Jadeja has been brought into the attack by Kohli.

400 comes up for the tourists with a boundary from Kagiso Rabada. Rabada also got off the mark with that shot.

Wicket! Keshav Maharaj (9) looks to clear Ashwin over mid-on but fails to time it well. Mayank Agarwal takes a simple catch and South Africa are 9 down now. Sixth wicket for Ashwin.

First boundary of the day! Keshav Maharaj plays it late and guides it to the third-man boundary.

This is how players warmed up ahead of the match.

Who is ready for DAY 4 😎🇮🇳 #TeamIndia #INDvSA @Paytm pic.twitter.com/E7GkT0wyqc

Ashwin starts from the other end for India.

Day 4 begins. Two players of Indian-origin are walking into the middle to face Indian bowlers on Day 4. Shami stars the proceedings.