Mumbai, April 18: Mumbai Indians skipper Rohit Sharma, who steered the defending champions to their first win of the season with a 52-ball 94, credited West Indian Evin Lewis for allowing him to settle down on the crease in the Indian Premier League (IPL) clash against Royal Challengers Bangalore. 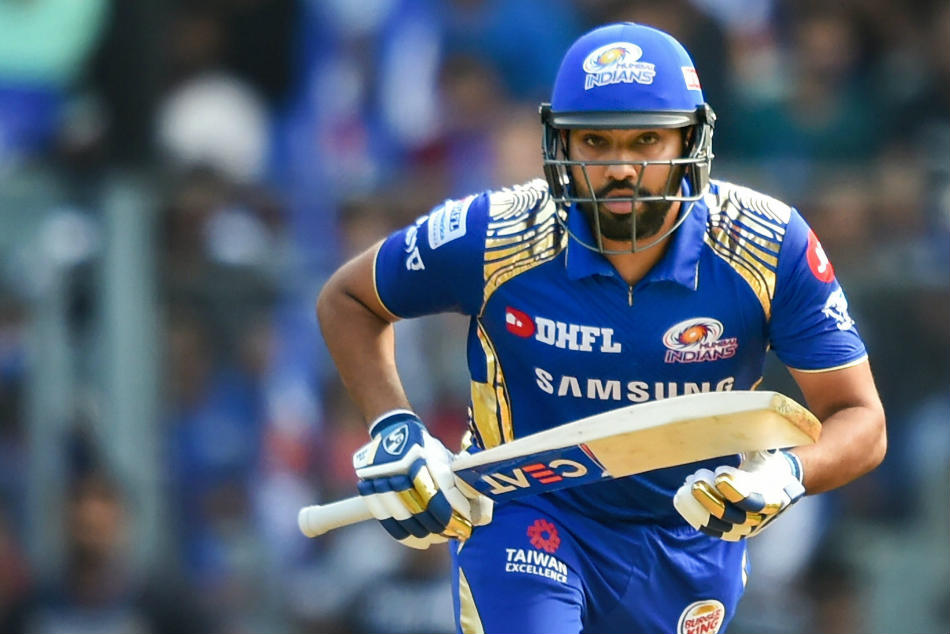 Mumbai Indians notched up their first victory by defeating Royal Challengers Banglore by 46 runs, here last night courtesy Rohit's 94 and Lewis' 65. The Mumbai franchise posted a steep 213/6 before restricting the opposition to 167/8 in 20 overs. "...with Evin Lewis batting, anything can happen, he is a great striker of the ball and anything in his area he is going to smash it and that is what he did. It allowed me to take my time, which was very crucial. We always wanted one set batsman to bat as long as possible and (it was a) perfect platform for me to do that," explained Rohit.

It was a @ImRo45 special that drove us to our first victory of the season, at the Wankhede last night! 🔥#CricketMeriJaan #MumbaiIndians #MIvRCB pic.twitter.com/QHGK53BaFx

The hosts started off horrendously as RCB pacer Umesh Yadav removed opener Suryakumar Yadav and Ishan Kishan in successive balls with MI struggling at 0/2. Rohit also said that his team was positive in its approach despite the first three losses. "The only thing we did not do as a group in the last three games was sometimes (when) we batted well, (then) we did not bowl well. (When) we bowled well, we did not bat well. The idea was to get both of these departments going and we wanted to be consistent - our bowling as well as batting," said the MI skipper.

.@ImRo45 spoke on the rescue act he carried out in the company of Evin Lewis.

He also praised the performance of his bowlers Mitchell McClenaghan, Krunal Pandya and Mayank Markande. "Today we did that and we got wickets with the new ball. Mitch bowled a great spell upfront to get the experienced batsmen out, and then Krunal came in and used his variation to his advantage. "He reads the batsman really well and not to forget Mayank, he is just 20-year old playing his fourth game and to come out and bowl in such difficult conditions, it is not easy," the 30-year-old batsman added.

Asked about the batting order, the skipper said he would continue to bat at number three, allowing the new players to settle down. "I do not think we are looking to change anything. It is important to give the guys the comfort, because they should know where they are batting for the next few games so they can plan accordingly. If you keep changing too much it does not help anyone.

MI win by 46 runs and register their 1st win of the tournament. @imVkohli played a wonderful hand of 92 but we fell short of one big partnership.
Credit to Rohit Sharma and Mitchell McClenaghan from the opposition for their performance 👏#PlayBold #RCBvMI #RCB

"All of us, myself, Pollard, Krunal (Pandya), Hardik (Pandya), we can take the pressure and make sure that the team gets into good position all the time. This is the ideal combination for us right now," he concluded.

Meanwhile, RCB head coach Daniel Vettori lamented Hardik Pandya's escaping dismissal on a DRS referral and said it cost the team another 20-30 runs. "Things also went against us. Hardik's dismissal, had we got him, may be they would have been 20-30 runs short. It does make a difference in the final score," said Vettori.

He said Washington Sunder and Yuzvendra Chahal were defensive while their MI counterparts were more attacking in their approach. "I think with Washington and Yuzi, they were probably in defensive position with Rohit and Lewis being very aggressive. When Mumbai spinners came on, their team was in a good position and that allowed them to actually bowl and be a little more attacking.

Terrible blow to young Ishan Kishan. The only good part is that he walked off the field with a steady gait. Hopefully injury is not serious

"We saw the rewards that they got. So, it's different styles of bowling. Mumbai were on top when they came into bowl but we weren't able to do a similar thing," he signed off.

Terming the freak injury to wicketkeeper Ishan Kishan as "unfortunate", Rohit said he is expected to be fine. Kishan sustained injury on his face in the 13th over of the game after a throw from Hardik Pandya bounced off the practice pitch and hit him on his face. Kishan was immediately taken off the field and was replaced by Aditya Tare, who captains Mumbai in domestic tournaments.

"That was very unfortunate but he seems all-right. He has got (a) little swelling in his eyes, which should be ok by tomorrow (or) day after. We have got few days before we play the next match on the 22nd (April), we will assess (him) and hopefully he will be fine," Rohit said.

Finally off the mark 😊 great work by the team @mipaltan