Chasing a target of 165, Punjab reached home in 19 overs and bagged two important points. Pooran's quickfire knock in the run chase helped his team overhaul the target as Jimmy Neesham hit the winning runs for his team.

Pooran got support from Gayle (29 off 13) and Maxwell (32 off 24) also made valuable contributions with the bat as Punjab kept cruising in the run chase. Punjab's top-order and in-form batsmen KL Rahul (15) and Mayank Agarwal (5) failed with the bat.

Kagiso Rabada (27/2), Axar Patel (27/1) and R Ashwin (27/1) were the wicket-takers for Delhi Capitals but they failed to prevent the opposition from scoring.

Dhawan remained unbeaten on 106 off 61 deliveries and carried his bat through and steered the top-ranked side to a respectable total. The southpaw was the wreaker-in-chief for Delhi batsmen as he attacked Punjab bowlers at will and also completed 5000 IPL runs in this game. Dhawan became the fifth batsman to enter the elite club and joined the likes of Virat Kohli, Suresh Raina, Rohit Sharma and David Warner.

Having elected to bat first, the Shreyas Iyer-led side couldn't get the start they were looking for in the powerplay as Prithvi Shaw (7) fell cheaply. The young right-handed batsman mistimed Jimmy Neesham's delivery and Glenn Maxwell took a simple catch at covers. 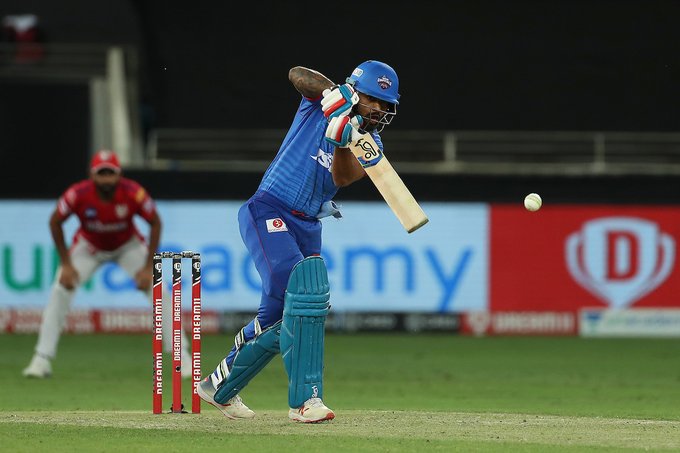 Delhi kept losing wickets at regular intervals as no other batsmen Shreyas Iyer (14), Rishabh Pant (14), Marcus Stoinis (9) and Shimron Hetmyer (10) failed to convert the starts they got, but Dhawan kept his wicket intact and didn't give Punjab bowlers an opportunity to dismiss him. Dhawan smashed 14 boundaries and three sixes in his imperious knock.

Glenn Maxwell (31/1), Mohammad Shami (28/2), Murugan Ashwin (33/1) were economical with the ball for Punjab. Neesham also picked up a wicket but he was a little costly. Ravi Bishnoi was once again impressive but he failed to get any wickets. Young pacer Arshdeep Singh also leaked in excess of 10 runs per over.

Delhi made three changes to their side as they included Rishabh Pant, Shimron Hetmyer and Daniel Sams in their playing XI. Sams, the Australian pacer, made his IPL debut tonight. Delhi rested Ajinkya Rahane, Alex Carey and Anrich Nortje.