Mumbai, May 22: The Wankhede Stadium was filled with chants for RCB and MI as Mumbai Indians handed Delhi Capitals a heart-breaking five-wicket loss on Saturday.

The Capitals, who needed a win to enter the playoffs, had only themselves to blame as mistakes on the field in a crunch game cost them the crucial two points and handed Royal Challengers Bangalore the final playoff berth. 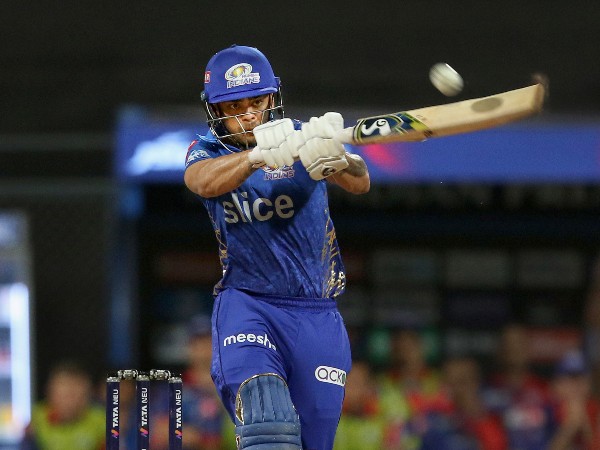 On the other hand, Mumbai Indians, who finished the season placed tenth on the points table, enjoyed a memorable night in front of the Wankhede crowd as they finished off with a win.

After being sent into bat in their must-win match, Capitals got off to a dismal start, losing four quick wickets. Daniel Sams handed MI the first wicket removing opener David Warner for just 5 off 6 as Bumrah picked him up at short third man.

Bumrah, who led the bowling attack, picked up two in the powerplay. First to go was Marsh, who fell for a golden duck. In a very Test like dismissal Marsh was picked up Rohit Sharma at slip as DC was reduced to 22/2 in 3.2 overs.

Bumrah struck on the final over of the powerplay to remove Prithvi Shaw (24 off 23) as DC struggled at 31/3 in 5.4 overs. The Capitals struggled to 37/2 in the powerplay.

Markande picked up the first wicket after the powerplay, as he removed Sarfaraz Khan (10 off 7) to reduce DC to 50/4 in 8.4 overs. Staring at a below par total, skipper Rishabh Pant and Rovman Powell resurrected DC's innings.

Powell hammered Shokeen for 20 in the 12th over to give the runrate a much-needed boost. The duo steadied the ship as they brought up 50 off 37. Powell and Pant stitched together 77 off 44 for the fifth wicket partnership to guide Delhi to a modest total.

Ramandeep came to MI's rescue as he removed Pant on a delivery that should have been called a wide. Pant was picked up by Ishan Kishan as DC's innings once again fumbled. Bumrah came back to pick up the big wicket of Rovman Powell (43 off 34) to restrict the Capitals.

After a shaky start the Capitals fought back to set a target of 160 as Bumrah stole the show at Wankhede with a three-wicket haul. Ramandeep picked up two.

In reply, MI registered their worst-ever powerplay this season as they were restricted to 27 for the loss of one wicket. Skipper Rohit Sharma (2 off 13) had a dismal innings before Anrich Nortje put him out of his misery.

But following the powerplay, Kishan along with Dewald Brevis gave the chase a much-needed boost with a solid second-wicket partnership. The duo stitched together 51 off 37 to overcome the slow start.

Kuldeep Yadav came to DC's rescue as he broke the partnership in the 12th over. Warner picked up a simple catch to remove Ishan Kishan for 48 off 35 and reduce MI to 76/2 in 11.3 overs. Kuldeep would have pocketed a second, but skipper Pant dropped Brevis on 25.

The dropped catch only cost DC 12 runs as Shardul Thakur handed Capitals the big wicket of Brevis (37 off 33). But with Kishan and Brevis setting the stage, it was the young Tim David and Tilak Varma who took MI home.

David's sizzling 34 off 11 and Varma's 21 off 17 guided MI home. The duo put up a sizzling stand of 50 off 20 as RCB watched with baited breath. Khaleel Ahmed was given the ball in the final over, and with just five to defend, the first ball was a no ball as Ramandeep sent the ball to the boundary ropes on the free hit. While MI finished the season off with a win, Capitals season also came to an end.

With DC's campaign coming to the end and the final playoff spot decided, the top four teams to qualify this season are, Gujarat Titans, Rajasthan Royals, Lucknow Super Giants and Royal Challengers Bangalore. With Rajasthan being the only side to have won the title, back in the maiden IPL season, the chances of the 15th edition seeing a new champion is high. While LSG and GT are newcomers, RCB is yet to win the IPL trophy.