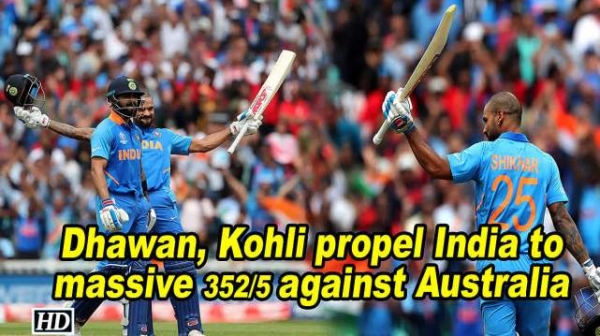 London, June 9: Shikhar Dhawan and the ICC tournaments share a very cordial relationship. Dhawan made his 6th hundred in an ICC ODI tournament when he made that 117 off 109 balls against defending champions Australia at the Oval here on Sunday (June 9). Now, he has only Sachin Tendulkar and Sourav Ganguly in that list ahead of him.

Both Ganguly and Tendulkar have seven hundreds each and they took 58 and 32 innings respectively to score them, while Dhawan reached 6 hundreds in just 20 gigs. Kumar Sangakkara and Ricky Ponting too have 6 hundreds each in ICC tournaments.

The hundred he made against the Aussies is a very important for him. Dhawan had struggled a bit in the initial part of the IPL 2019 for Delhi Capitals before a scoring a few runs in the return leg of the tournament. But the struggles seemed to get back at him when he failed in three successive innings - two side games against New Zealand and Bangladesh and in their ICC World Cup 2019 opener against South Africa.

The dimissal against Kagiso Rabada reminded one of his old weakness, the unsure mind when the ball pitched on the fourth stump and moving away from him at good pace. Dhawan fell to that old weakness at Southampton where the conditions remained bleak and in favour of the bowlers.

In that context, the match against Australia assumed importance for him because another failure would have added a bit of pressure on him. And the presence of quality pacers like Mitchell Starc and Pat Cummins only boosted the Doubting Thomasses.

But Dhawan underlined his class, temperament and big match ability with a fluent hundred against Australia. His opening partner Rohit Sharma had made a hundred against South Africa in the first match and now Dhawan joined him with a ton of his own. The form of openers, particularly because of their patchy outings in the IPL and in the side games, might have been a bit concern and they have allayed it in brilliant fashion.

The opponents of India will be all the more wary of facing Virat Kohi and his band.