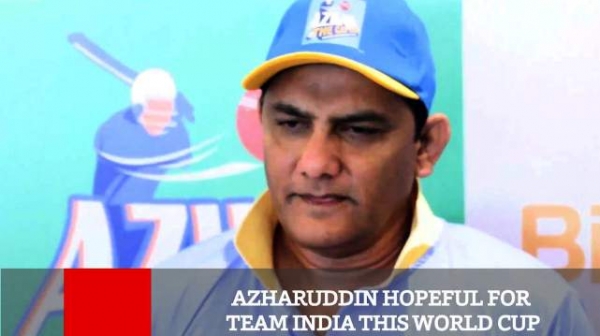 Bengaluru, May 8: He had become the Indian captain at the age of 27 and the late Raj Singh Dungarpur's famous question "Miyaan, captain banoge?" has become a folklore.

Mohammad Azharuddin took up the reins of India's captaincy in 1990 when a galaxy of stars of Indian cricket waned out. Though never as cunning as some of the other captains around the world who had served a much lesser tenure than him, Azharuddin went on to survive an entire decade with patches when Sachin Tendulkar served at the helm.

One of Azharuddin's biggest role in Indian cricket is that he had led his country in as many as three World Cups, a feat only champion skippers like Clive Lloyd and Ricky Ponting have with two titles each. He led India in all three WCs that were played in the 1990s - 1992, 1996 and 1999 though the best he could come up with was in 1996 when India made the semi-finals after a gap of nine years.

Azharuddin's first WC game as the skipper was against England in Perth in 1992 and he fell for a golden duck in that game off the bowling of Dermot Reeve. India went on to lose the match by 9 runs and in the entire edition, they could win only two games and lose five while one match against Sri Lanka was washed out.

India finished a poor seventh among nine teams in the fray. Azharuddin though was the highest scorer for India in that tournament.

In the 1996 world cup, India were one of the favourites since the tournament was played at home. However, they had an ordinary run in the group stage - winning only against debutants Kenya, a weak West Indies and a moderate Zimbabwe.

India lost to both the tough opponents in the group - Australia and Sri Lanka. India then had their highest moment of the tournament when they beat Pakistan in the quarter-finals to make the semis. But a pathetic batting display and the consequent crowd disturbance cut short Azhar's best run in the world cup.

After some drama in between when Tendulkar became the captain in 1996 only to lose it again to Azharuddin in 1998, the stylish Hyderabad batsman was in charge of the side in the 1999 WC.

India started off disastrously, losing to South Africa and Zimbabwe in their first two games. But then it was a grieving Tendulkar followed by the Taunton thrashing by Sourav Ganguly and Rahul Dravid that brought India back into the track.

India scraped through to the Super Six but lost to Australia and New Zealand to crash out. Their only high point in this edition was again a win over Pakistan at Edgbaston.

Azharuddin ended up captaining 174 matches for India and won 90 and lost 76. Two were tied while six were inconclusive. Only Mahendra Singh Dhoni with 110 wins out of 200 games is ahead of him. However, apart from clinching three wins over arch-rivals Pakistan, Azharuddin couldn't really achieve much at the World Cup despite leading in a number of editions.