Nizhniy Novgorod, July 6: Raphael Varane and Antoine Griezmann scored as France advanced to a World Cup semi-final against either Belgium or Brazil after easing past Uruguay on Friday (July 6). 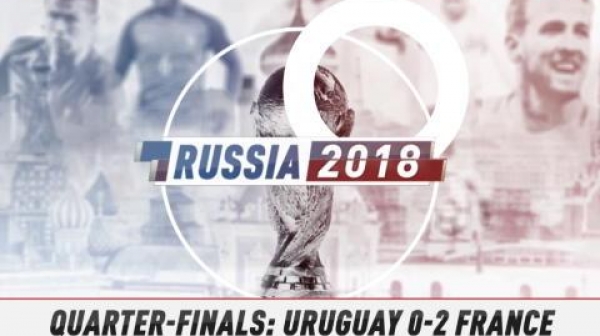 Following an opening passage high on energy but bereft of quality, Varane glanced home a Griezmann free-kick to open the scoring before the Atletico Madrid man doubled France's advantage just after the hour mark in a moment to forget for Uruguay goalkeeper Fernando Muslera.

Griezmann found space 25 yards out and fired in a shot that should have been routine for Muslera but the ball slipped through his grasp and into the net.

#FRA reach the semi-finals for the first time since 2006, and their sixth time in total 🤙#URUFRA // #WorldCup pic.twitter.com/KYhZW0E23J

Oscar Tabarez's Uruguay, without injured striker Edinson Cavani, never looked like finding a route back into the game and France now await Friday's late game to see who they will meet in St Petersburg on Tuesday.

The opening 40 minutes were notable only for Uruguay's pressing and harassing of France whenever Didier Deschamps' men were in possession, and a bad miss from Les Bleus' golden boy Kylian Mbappe.

The Paris Saint-Germain striker, who scored twice in the 4-3 defeat of Argentina in the last 16, ought to have opened the scoring in Nizhny Novgorod but fluffed his lines horribly after 15 minutes.

2006 - Raphael Varane is the first French 🇫🇷 player to score in a World Cup quarterfinal since Thierry Henry against Brazil in 2006. Head.#WorldCup pic.twitter.com/bxRkJQLjgX

After latching on to Olivier Giroud’s knockdown in the box, Mbappe had time and space to bring the ball down but instead attempted a header that drifted harmlessly over Muslera's crossbar.

The game was crying out for some creativity and it arrived five minutes before the break. Griezmann's inswinging free-kick from the right was met by Varane and his flicked header flashed past Muslera and into the bottom left corner.

France started the second half on the front foot but it was still a surprise when they made it 2-0 after 61 minutes. Muslera suggested the ball swerved but he should have got his body behind Griezmann's shot and could only watch as it dropped apologetically into the net.

Uruguay substitute Cristian Rodriguez fired a shot a yard wide after 64 minutes but the South Americans were struggling to create anything and their frustration boiled over when Mbappe went down softly under a challenge from Rodriguez, prompting angry confrontations involving Godin, Nahitan Nandez and Paul Pogba.

44', Wow, save of the tournament contender from Hugo #Lloris to keep the score at 1-0! ⛔️#FiersdetreBleus #WorldCup #URUFRA pic.twitter.com/PFCCUVA2XN

Corentin Tolisso could have made it 3-0 to France after 73 minutes but curled over, while Griezmann also flashed a late free-kick over the top.

Uruguay centre-half Jose Gimenez was in tears with five minutes to go, such was his anguish as France cruised home.