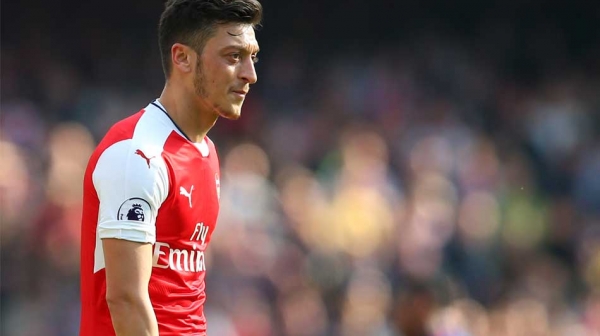 Ozil was criticised by the DFB after meeting Turkey president Recep Tayyip Erdogan before the World Cup.

The Arsenal star, who has Turkish heritage, explained on Sunday his meeting with controversial figure Erdogan "had no political intentions".

In the second part of a three-part statement, Ozil hit out at the DFB over its handling of the incident, suggesting the Erdogan meeting has been cited unfairly as a factor in Germany's group-stage exit at Russia 2018.

And in the concluding section of the statement later on Sunday, Ozil confirmed he will no longer be available for selection by Germany coach Joachim Loew, pointing the finger at Grindel for being "patronising" and "incompetent", as well as accusing him of belittling the midfielder's opinion.

In the final part of his statement, Ozil wrote: "Arguably the issue that has frustrated me the most over the past couple of months has been the mistreatment from the DFB, and in particular [DFB] president Reinhard Grindel.

"After my picture with president Erdogan, I was asked by Joachim Loew to cut short my holiday and go to Berlin and give a joint statement to end all of the talk and set the record straight.

"Whilst I attempted to explain to Grindel my heritage, ancestry and therefore reasoning behind the photo, he was far more interested in speaking about his own political views and belittling my opinion.

"Whilst his actions were patronising, we came to agree that the best thing to do was to concentrate on the football and the upcoming World Cup. This is why I didn't attend the DFB media day during the World Cup preparations.

"I knew journalists discussing politics and not football would just attack me, even though the whole issue was deemed to be over by Oliver Bierhoff in a TV interview he did."

Ozil has won 92 caps for his country, scoring 23 goals and playing a key role as Germany won the 2014 World Cup in Brazil.

The former Real Madrid man went on to note that Queen Elizabeth II and British prime minister Theresa May had likewise met with Erdogan, adding: "Whether it had been the Turkish or the German President, my actions would've been no different.

"I get that this may be difficult to understand, as in most cases the political leader cannot be thought of as being separate from the person. But in this case, it is different. "Whatever the outcome would've been in the previous election, or the election before that, I would have still taken the picture."