Bhubaneshwar, April 13: Sunil Chhetri scored his second hat-trick in BFC colours (13, 55, 90+4) to set up a semifinal clash for the gallery against Mohun Bagan as Albert Roca's Bengaluru FC beat NEROCA FC 3-1 at the Kalinga Stadium in Bhubaneshwar on Friday (April 13).

The early kick-off in seemingly harsh conditions didn't dictate the tempo that Bengaluru are used to playing at, or so it seemed, when Chhetri finished off a fantastic breakaway move with a header in the 13th minute. Miku deftly switched flanks and Udanta Singh sent in a cross that was parried away only for the Blues' skipper to nod home into an empty goal. 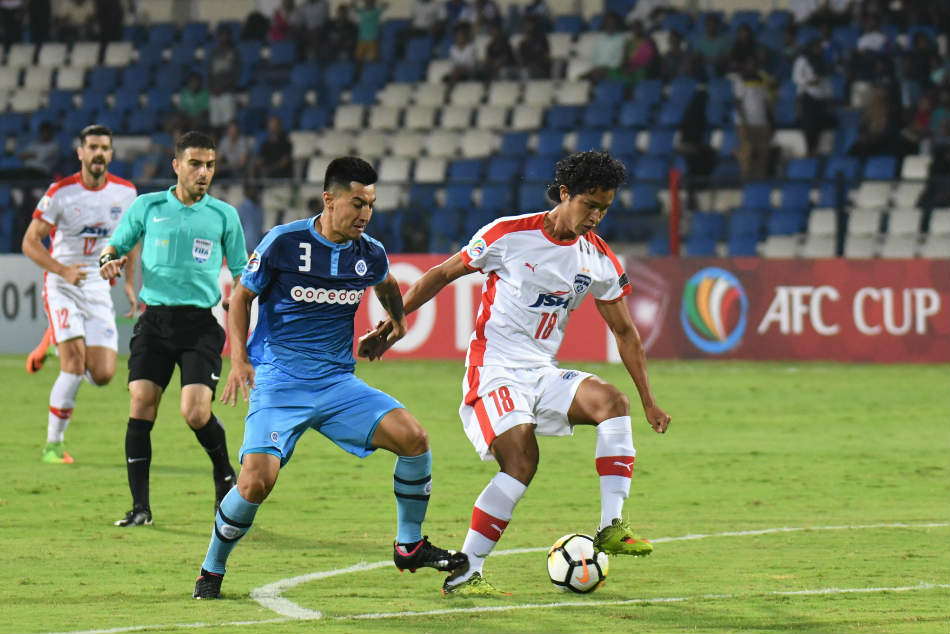 With the lead in hand, Bengaluru began moving the ball around with more ease, stitching together some delightful passes in the process. Miku for one, brought the flicks and twists to the pitch while Udanta kept drawing orange shirts to him every time he had possession. Miku had a shy at goal from distance, Erik Paartalu came close with a glancing header and Chhetri saw a hit saved at point-blank range by NEROCA goalkeeper Lalit Thapa.

Hello, old friend! The Blues will face Mohun Bagan in the semifinals of the #HeroSuperCup. Who's excited? #BFCvNFC pic.twitter.com/i8PWc8phOk

However, an uncharacteristic error from Gurpreet Singh Sandhu let NEROCA claw back into the tie with just a minute of additional time in the first half left to play for. Sandhu failed to latch on to a free kick, spilling the ball at the feet of Pritam Singh. The Bengaluru 'keeper recovered well to keep out a shot from close only to see Pritam get a second chance that he put away.

Not keen on the prospect of bowing out of the tournament or taking the game to extra time, Bengaluru began pushing NEROCA to the ropes as soon as the second half began and Chhetri made the charge count with a calm finish in the 55thminute. The skipper beat the last line of defence and was picked up perfectly by a flick from Miku. With only Thapa to beat, Chhetri placed it past the 'keeper's left to make it 2-1.

90+4' THE MAN! THE MOMENT! Chhetri picks the pass from Toni, and takes another touch, before fading it away into the far corner. 3-1. #BFCvNFC pic.twitter.com/gtqElacGyi

Looking to replicate a miracle that saw them come back from two goals down to beat Kerala Blasters 3-2 in the pre-quarterfinal, NEROCA efforts often came crashing into a solid Bengaluru defence.

In what was a goal that stamped the seal on things, Chhetri was picked out by second half substitute Toni Dovale before caressing the ball past Thapa with just the perfect hint of a curl, giving the skipper his second hat-trick in a Bengaluru shirt.

Bengaluru will face Mohun Bagan in the semi-final of the inaugural Super Cup, on April 17, with the winner set to play one of FC Goa or East Bengal.