Repino, July 6: John Stones believes he and his Manchester City team-mates are helping to bring some of Pep Guardiola's influence into England's World Cup campaign.

Stones produced arguably his finest display in international colours as England came through a bruising 1-1 draw against Colombia in Moscow on Tuesday (July 3) before prevailing on penalties to book a quarter-final clash with Sweden.

Club-mates Kyle Walker and Raheem Sterling have been mainstays of Gareth Southgate's first-choice XI in Russia along with Stones, while City midfielder Fabian Delph has also featured and is back with the squad after returning home for the birth of his third child.

England fans looking for positive omens amid the growing wave of "It's Coming Home" optimism in their homeland might look to the identity of the past two World Cup winners.

Barcelona and Bayern Munich were both coached to league title successes by Guardiola in 2009-10 and 2013-14 respectively before their players provided the nucleus of Spain and Germany's runs to World Cup glory.

"I think going into the Pep effect – he's definitely had it on us City boys and we’ve tried to bring what we've learned off him into the England squad," said Stones, who won his first Premier League title at the Etihad Stadium last term.

"Bringing in a fresh idea – not on the whole game – but on certain aspects of it. Everyone does that from their clubs and managers. That's why I think we have got a great combination of players."

Stones performed superbly for City at the start of 2017-18 until suffering a hamstring injury in a win at Leicester City in November.

A consistent return to that form proved elusive when he regained fitness and, at various times, he found himself beneath Nicolas Otamendi, captain Vincent Kompany and club-record signing Aymeric Laporte in the pecking order at centre-back.

Nevertheless, the 24-year-old still needs little invitation to sing Guardiola's praises with regard to the Catalan's ongoing impact on his career and feels he has made significant strides over recent months. 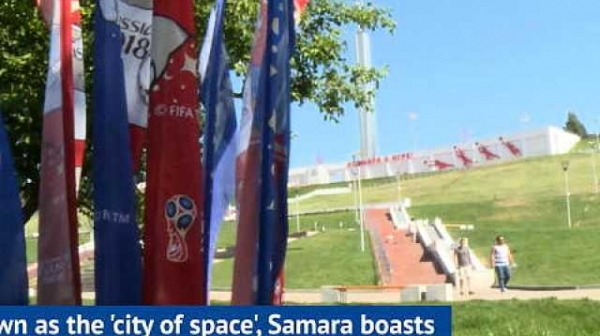 Behind the Scenes - England v Sweden in sunny Samara

"On a personal note, I wouldn't be here without what he has done for me over the last two years as a player and as a person," said Stones, who revealed Guardiola sent him a text message before the tournament pledging to watch all his games.

"I've come on leaps and bounds if you look at me – even from Christmas time to the end of the season, I thought I improved massively.

"That is down to his dedication and how much he wants us to improve as players. It's a massive thing for me personally.

"Since I came he's always had the right things to say to me and simple things. That is what is important, not flooding your mind and overloading you with too much information.

"It's about giving you the right amount and making everything simple. He's simplified my game as well."

After Tuesday's drama from 12 yards, a simplified route at the weekend would be welcomed by England and their increasingly authoritative centre-back.