By Pti
Updated: Monday, December 11, 2017, 9:50 [IST]
oi-MyKhel Team
SV Sunil of India (bottom) celebrates with teammate Sumit after the win over Germany in the HWL Final third-place match in Bhubaneswar on Sunday

Bhubaneswar, December 10: India reclaimed the bronze medal at the Hockey World League (HWL) Final after eking out a close 2-1 win over a depleted Germany in the third-fourth place classification match here on Sunday (December 10). 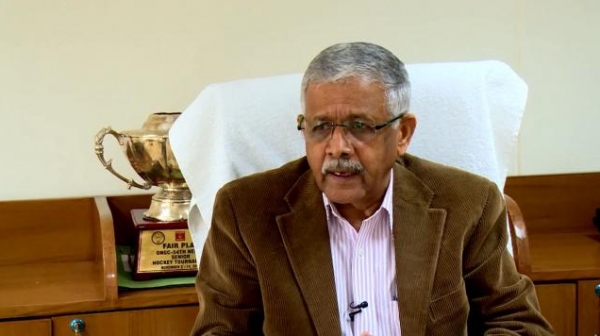 I Think India Is Regaining The Past Glory - MP Ganesh

It was always going to be a David vs Goliath task for Germany as they were without five players due to illness and injuries.

Germany had 13 players at their disposal in the semi-final against Australia on Saturday (December 9). But things turned from bad to worse when they had just 11 players to play with, including reserve goalkeeper Mark Appel, in the bronze medal match after two more players fell ill.

But the Germans dished out a fighting performance. They had 13 shots at the goal compared to India's 12 with Appel playing as a forward. The Germans also had more penalty corners. They secured seven as against the hosts' four.

India took the lead in 21st minute through SV Sunil before Germany equalised through their reserve custodian Mark Appel (36th). A penalty corner conversion by Harmanpreet Singh in the 54th minute sealed the win and the third place for the Indians.

India had also won the bronze in the last edition of the tournament in Raipur in 2015.

In the first quarter, Germany did not give India any clear cut chance. But they secured a PC in the 14th minute, which was well-defended by the Indians.

Finishing in the podium is the best way to end this year ...... congratulation boys ... Respect to the German team 🙏🙏🙏🙏🙏#hwl2017 @TheHockeyIndia @FIH_Hockey

Soon after, Germany captain Mark Grambusch, who himself played with fever, got a good opportunity, but his shot from left side was just wide of the target.

The determined Germans continued the same way and earned two more penalty corners in the 19th minute, but Indian goalkeeper Suraj Karkera made valiant saves to keep the score 0-0.

Many congratulations to the Indian Hockey team for winning 🥉 in the #HWL2017!

An opportunist India took the lead in the very next move against the run of play, when Sunil scored from a rebound.

It was set up by Harmanpreet Singh's defence splitting ball to Akashdeep Singh inside the D. But his reverse shot was saved by German custodian Tobias Hauke only for Sunil to score off the rebound.

India had the first shot at the goal after the change of ends, but Akashdeep's shot in the 33rd minute was kept away by Hauke.

For the spirit of Hockey will always be bigger than the joy of victory. ❤️🏑#LoveHockey #HWL2017 pic.twitter.com/38Y3NgzsDS

The Germans showed they are not here to just make numbers and entertain the crowd as they stunned India three minutes later when Appel tapped in skipper Mark Grambusch's pass to draw parity.

India secured three back-to-back penalty corners in a span of two minutes, the last of which was converted by Harmanpreet with a powerful, low grounded flick.