New Delhi, October 25, 2018: The Indian duo of Ajeetesh Sandhu and Tapy Ghai excelled on day one of the Asian Tour's Panasonic Open India. 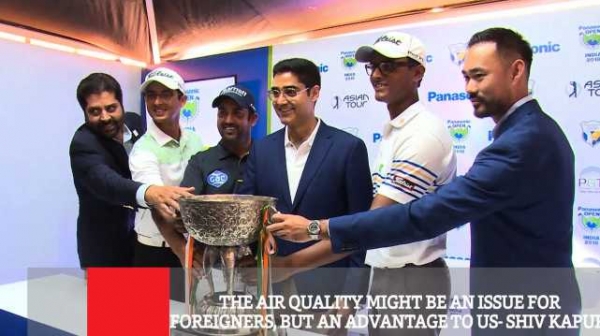 The Air Quality Might Be An Issue For Foreigners, But An Advantage To Us - Shiv Kapur

Sandhu, a winner on the Asian Tour and last year's joint runner-up and young Ghai, playing only his second season as a professional, shot scores of five-under-67 at the Delhi Golf Club (DGC) on Thursday (October 25) to be placed tied second.

The lead was held by Thailand's Suradit Yongcharoenchai at six-under-66. While Bangladesh's Md Siddikur Rahman (67) also took a share of second, the other Indians who enjoyed a strong start at the US$400,000 event were Veer Ahlawat and Rashid Khan in tied fifth with scores of 68 and Jeev Milkha Singh, Kapil Kumar and Karandeep Kochhar in tied ninth with scores of 69.

Thai teenager Suradit Yongcharoenchai broke clear of the tight leaderboard by signing for an opening 66 to lead by one. https://t.co/JXrfoFb7W3 pic.twitter.com/xdKvdTHWmU

Ajeetesh Sandhu, a winner on the Asian Tour last year, was quick off the blocks collecting three birdies on the front nine at the cost of one bogey. The man with two top-10s in Asia this year then stepped on the gas on the back nine as he gathered four more birdies in exchange for a single bogey.

Interestingly, the 30-year-old's day one performance was reminiscent of his first round show last year when he had taken the lead with an eight-under-64. Chandigarh lad Sandhu said, "The score is pretty good. I played alright, not my best. It's something that might just happen on this course. I think I played pretty well. That three birdies in a row kind of gave me some momentum heading into the remainder of the round.

"I hit two good shots on the 13th and made a 10-footer for birdie there. The 14th hole was the toughest hole that I birdied today. I hit a great chip for eagle on the 18th but it somehow lipped out. But I'll take it. I'm happy with the birdie on the last.

"It was pretty warm out there. There was no wind so it was pretty easy. The greens are a bit slow so you got to be aggressive with your shots. If you miss on the wrong side of the greens, you miss another chance. I am sure the conditions will be different tomorrow morning. It plays completely differently when the sun comes out. The course plays shorter and it's definitely easier. I'll just take it as it comes. I have played this course enough times."

#PanasonicOpenIndia@ajeeteshsandhu misses eagle on the 18th by an inch but a birdie was good enough to give him a share of lead as he signs for a 67.https://t.co/JXrfoETwxt pic.twitter.com/nDeg7yv6ai

Gurgaon-based Tapy Ghai, who bagged his maiden professional title on the PGTI earlier this month, carried his form to the DGC as he mixed seven birdies with two bogeys. The 22-year-old made a couple of birdie conversions from a range of 12 to 20 feet.

Ghai said, "When you score seven birdies it's always a good round. All the aspects of my game were in good shape today. I had clarity of mind and didn't have any doubts during my round so that helped. I've drawn a lot of confidence from my first professional win which was achieved on the PGTI earlier this month in Ahmedabad. That win has helped me break some mental barriers. I feel like a different player now."

Md Siddikur Rahman produced a bogey-free 67 at his favourite course where has secured 12 top-10 finishes in the past. Veer Ahlawat, another 22-year-old, made a mark on day one draining six birdies against a lone bogey. Ahlawat has been one of the most consistent performers on the PGTI since he turned pro back in 2016. In the last three seasons he has 13 top-10s to his credit. Defending champion Shiv Kapur carded a 70 to be tied 16th.