Pune, April 11: Delhi’s Honey Baisoya dominated round two of the Pune Open Golf Championship 2018 as he fired a sensational seven-under-64. The 21-year-old Baisoya, a four-time winner on the PGTI, moved into a three-shot lead at 12-under-130 as a result of his super effort at the Poona Club Golf Course on Wednesday. 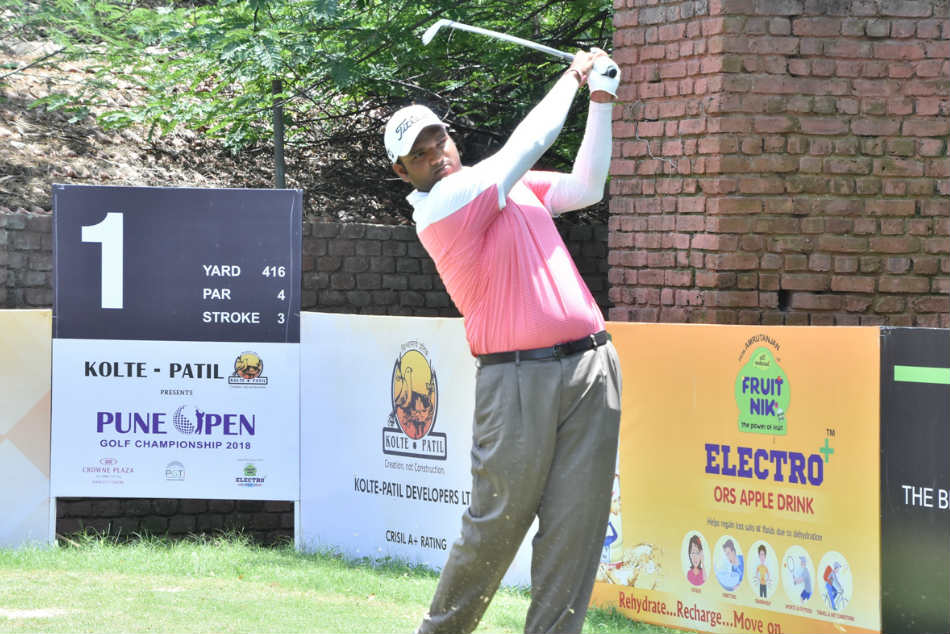 Allahabad’s Samarth Dwivedi (65) and Ahmedabad’s Udayan Mane (67) shared second place at nine-under-133. Honey Baisoya (66-64), one of the seven joint overnight leaders, did not enjoy a great start to the day as he was one-over after five holes thanks to two early bogeys and a birdie.

He then got into his groove with three birdies between the sixth and the ninth. The highlight of his round came on the 10th where he made an eagle-two after driving the green and sinking a 10-footer. After suffering a minor hiccup with a bogey on the 11th, Honey drained four birdies to end up with a card of 64. The pro from the Delhi Golf Club made some spectacular birdies on the back-nine. He drove the green on the 14th before making a two-putt and then almost holed it from 153 yards on the 18th.

Baisoya said, “The conditions were tougher today as the wind was up. I did well to shoot a seven-under despite a slow start. My putter was on fire today. I made a career-best 24 putts today which included 12 to 13 single putts. However, on the other hand, I haven’t been in good driving form. I gave myself a target of five-under today and that served me well.

“After the quiet start, the birdies on the sixth, seventh and ninth really helped me settle down. I found the bunker on the ninth but recovered well to extract a birdie there. Thereafter, the eagle on the 10th was a huge confidence-booster.

“As for the plan for the next two days, I changed my swing a couple of days back so I’m working on that aspect and also looking to improve on my hitting. My goal this week will be to try and break the 20-under mark.”

Om Prakash Chouhan of Mhow, another round one leader, was a further shot back in fourth position.

Sri Lankan K Prabagaran produced the tournament’s best score, an eight-under-63, to end the day in tied fifth at seven-under-135. Prabagaran’s sizzling error-free round saw him follow-up his eagle-two on the fifth with birdies on the sixth, seventh and eighth. The Lankan holed his approach shot from 125 yards for eagle on the fifth.

Delhi’s Naman Dawar, also one of the leaders in round one, sank two eagles, both chip-ins, during his second round of 70. Naman holed it from the bunker for an eagle-two on the 10th. Dawar closed the day in tied eighth at six-under-136.

Among the other prominent names, joint round one leader Digvijay Singh from Gurgaon slipped to tied 16th at four-under-138. Delhi’s Rashid Khan was also in tied 16th while Chandigarh’s Ajeetesh Sandhu was in tied 20th at three-under-139.

The only Pune player who made the cut was Akshay Damale (71-70). He was tied 30th at one-under-141. The cut was declared at one-over-143. Fifty-nine professionals made the cut. Defending champion Anura Rohana of Sri Lanka missed the cut by three shots.