Bengaluru, August 10: The second day of the Take Solutions Masters saw another barrage of low scores and a flurry of birdies as another Thai golfer put on a sizzling show to grab solo lead at the Karnataka Golf Association on Friday (August 10). 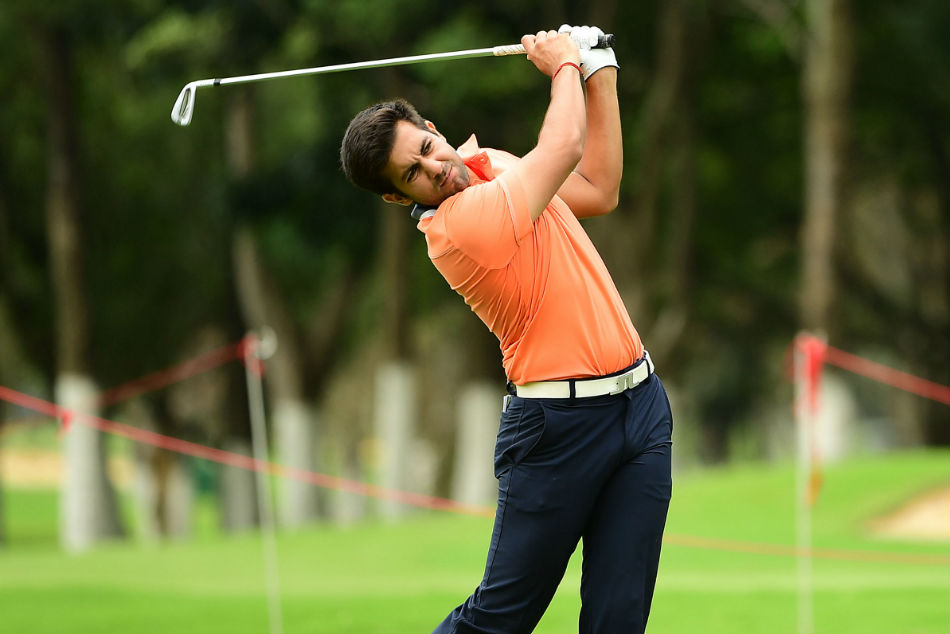 Starting the day at tied second, four shots behind overnight leader Thammanoon Sriroj, 22-year-old Danthai Boonma turned heads as he got off to a blistering start with seven straight birdies, which saw the youngster turn in a superb card of 10-under-61 for an overall total of 15-under-127. Meanwhile Sriroj had a bad day in office and slipped down to tied 8th after turning in a card of 3-over-74.

The youngster, who made his Major debut at The Open in 2016, gave himself a comfortable lead with Australia’s Maverick Antcliff and Argentina’s Miguel Carballo lying five shots behind him at tied second. While Antcliff turned in a card of six-under-65 to jump from tied 7th to tied 2nd, Carballo carded five-under-66 to stayed at tied 2nd heading into the penultimate day.

Sole leader Boonma, who had secured a tied 2nd finish on the opening day, got off to the best of starts. He outdid his compatriot Sriroj’s explosive opening day exploits. Placed 24th on the Asian Tour’s Habitat for Humanity Standings, the former Asian Tour winner saved seven straight shots to leave the chasing pack far behind. On the back nine Boonma went onto card three more birdies on 11, 13 and 14 to end the day with a blemish-free card. More importantly this is the second day that the Thai youngster has not dropped a shot.

Elated with his performance, Boonma said, “It’s amazing! It’s my personal best, my first time shooting 10-under-par in my life. I feel very happy and excited. It’s my first time starting the round with seven birdies in-a-row too! It’s just amazing.

All in a day's work for Danthai Boonma 🇹🇭

“I kept to my routine out there. My putting was very good today. I was able to hit it close as well. I forgot my Buddhist pendant necklace this morning. It’s like my lucky charm so I went back to the hotel to take it just 20 minutes before my tee time this morning. Thankfully the hotel is just next to the course.

“It’s pretty windy today. Good that I had the experience of playing against the wind at The Open earlier. But obviously the windy conditions here can’t be compared to what it was at Carnoustie. I guess that experience helps as I felt it was easier here and I felt more comfortable playing in the wind here as well,” said Boonma, who had missed the cut at The Open last month.

Talking about his game plan for the penultimate day, Boonma added, “I just want to enjoy my game tomorrow and not think too much. I’ve been singing this Thai song in my head and I want to continue that tomorrow. It helps calm me down. I will keep smiling and keep it fun out there.

With a five-shot lead and a consistent show over the last two days, a win is not a remote idea for the youngster. “It’s been three years since I last won. I definitely want to do it again, especially after coming close a few times this year. But having said that, I don’t want to put so much pressure on myself so I won’t think about it,” signed off the happy golfer.

While the Thai golfers kept a stranglehold on the leaderboard, the local crowd had something to cheer about as well. Karnataka lad S Chikkarangappa who had ended the opening day at tied 24th, put on a herculean effort to overcome the deficit with a seven-under-64 for a total of nine-under-133. The local favourite saved eight shots on the day with just one dropped shot on the 17th. With the KGA being his second home Chikka has put himself in for the title.

Speaking about his round, Chikka said, “I started good. I have actually not been feeling well, yesterday I had some cold and a bad throat. Luckily I had a morning tee off yesterday, and then I had a lot of time to recover, so I did that. Today the body was feeling great.

The Chawrasias - uncle @SSP_Golf and nephew Sunit - combined to score 11-under par today in the 2nd rd of @TSMastersgolf. SSP made a bogey-free 65, while Sunit made 7 birdies in his 66. What a duo!! @asiantourgolf @PGTITOUR @TAKEgolfing pic.twitter.com/81LhJC2SZt

“Overall I played superbly well today and my putting was really amazing. I hit the ball really good. I did a couple of changes just before this event with Mr. Sujith Somasunder from a mental aspect and also with my coach on a couple of things. Overall I would say it was a phenomenal round.

“Hole no. 8 was a very good putt. It was a downhill left to right putt. A lot of thoughts were going through my mind, whether it will break or not. It was a much needed putt for me to boost myself going forward into the back nine. It was about 15-18 feet.

“Everything was going in today, and yesterday nothing went in. Yesterday also I felt I putted really well, but it was just that everything was on the cup or just lipped out. But I knew I was putting really well so I went with the confidence. That's what I have been on - to forget what happened previously and focus on that particular moment and shot.

“I love playing at home. I have won plenty of events at home and the kind of love and warmth you get from the people of Bangalore, it is really amazing. There is no pressure, they actually cheer you up. It doesn't matter if you win or you don't win, they are always there and come out and support you. And I really thank them for that,” said the home boy.

Another seasoned Indian who had been struggling since the start of the season SSP Chawrasia, turned in a card of six-under-65 to end the day at fifth place. Lying a stroke behind him was Viraj Madappa.

Meanwhile tournament favourite Khalin Joshi was a further stroke behind at tied 8th with a total of six-under-136.

Asian bound amateurs Adil Bedi and Harimohan Singh both made the cut at the KGA while teammate Rayhan Thomas missed the card. The other prominent names to miss the cut were Udayan Mane and Jeev Milkha Singh.

Meanwhile, Feroz Singh Garewal who had been the best placed Indian on the opening day turned in a card of three-over to slip down the leaderboard to tied-40.