Bengaluru, November 6: MotoGP has a new world champion and it is Francesco Bagnaia with the Ducati Lenovo Team rider finishing ninth in the season-ending race in Valencia, in what can be described as the most befitting tribute to to the man who mentored him -- Italian great Valentino Rossi.

At the Valencia GP on Sunday (November 6) defending champion Monster Energy Yamaha's Fabio Quartararo needed nothing less than victory to have any hope of a second straight crown, but finished a fighting fourth in a race won by Team Suzuki Ecstar's Alex Rins. 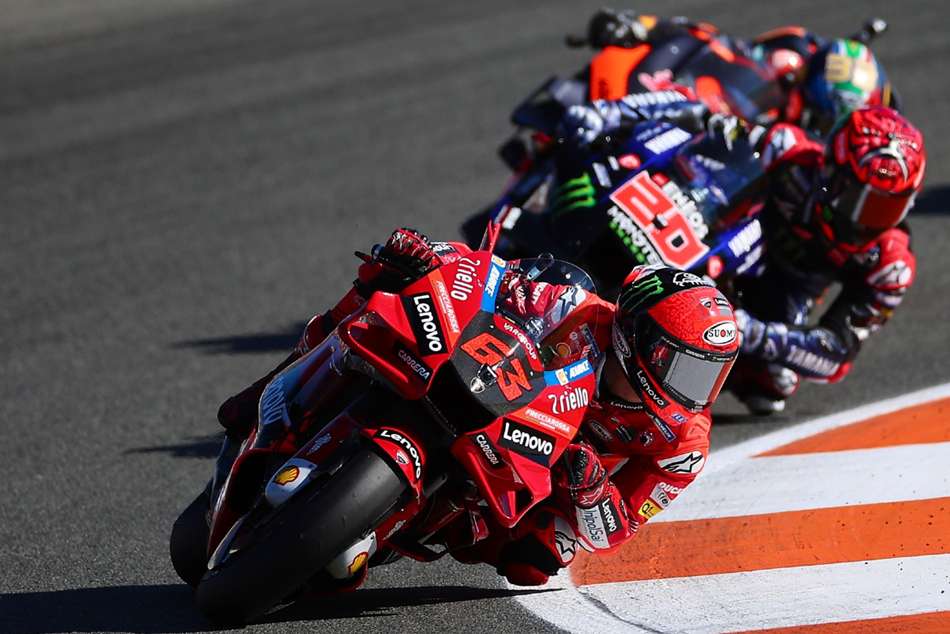 With mentor Rossi watching from the paddock, Bagnaia clinched his maiden world title in the premier class of Grand Prix motorcycling in a befitting tribute to the MotoGP legend. Way to go champ!

As Bagnaia savours his maiden world MotoGP crown, with Dorna Sports inputs, myKhel.com looks at the statistical highlights of his triumph.

3. Bagnaia's title is the 21st in the premier class for Italy and the 80th overall in Grand Prix racing.

4. Bagnaia became the second Ducati rider to take the premier class world title along with Casey Stoner in 2007.

5. With 11 premier class wins, all with Ducati, Bagnaia sits in third place on the list of Ducati riders with most wins in the class behind Stoner (23 wins) and Andrea Dovizioso (14).

6. Since 2001, there have been only two occasions on which the rider who clinched the title at the end of the year did not finish within the top five in the opening race of season -- Joan Mir (2020) and Bagnaia (2022); they both crashed out.

From Moto2 to MotoGP

7. In addition, Bagnaia became the first rider to clinch the premier class title with five Did Not Finishes throughout the season.

8. Bagnaia is only the second rider to clinch the premier class world title having previously clinched the Moto2 title along with Marc Marquez.

9. With 20 premier class podiums so far, Bagnaia is the fifth Ducati rider with most podiums in the class, behind Miller (21 podiums). Stoner leads the way with 42 podiums.

10. This season Bagnaia has stood on the MotoGP podium more than any other rider (10 times), including seven wins. Only two Ducati riders have scored seven (or more) wins in a single season: Stoner (10 in 2007) and Bagnaia (2022).