Bengaluru, September 24: #Fedal was trending on social media as Rafael Nadal became very emotional in Roger Feder's farewell match saying an important part of my life is leaving after partnering Roger Federer for the final match of the Swiss great's career at the Laver Cup in London.

The last match of Federer's career saw him partner with his great rival Nadal to play doubles for Team Europe on Friday, taking on American duo Jack Sock and Frances Tiafoe at London's O2 Arena.

Despite taking the first set, Nadal and Federer ultimately fell to an entertaining 4-6, 7-6 (7-2), 11-9 loss before watching a series of tributes to the Swiss maestro, who also had an on-court interview and was embraced by his team-mates, opponents, family and friends. 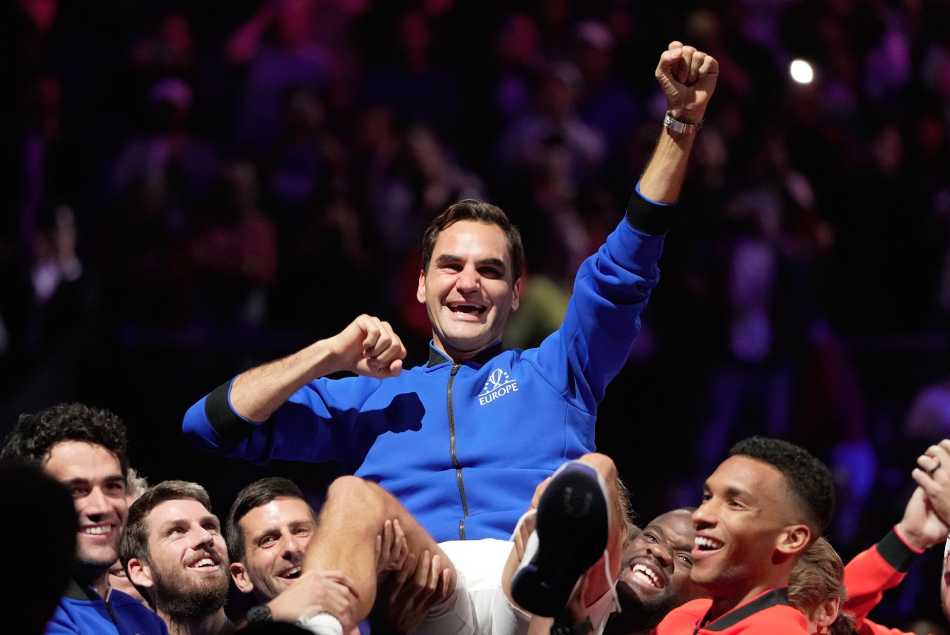 Nadal, one of just two male players with more Grand Slam wins than Federer's 20 (22, also Novak Djokovic with 21), was seen to be in tears as he sat next to the retiring star during the post-match tributes.

During the match, he also showed signs of nerves due to the scale of the occasion and later declared he would hugely miss his long-time rival.

"It has been a difficult day to handle every single thing, and at the end everything became super emotional," Nadal said.

"For me, it has been a huge honour to be a part of this amazing moment of the history of our sport.

"When Roger leaves the tour, an important part of my life is leaving too because of all the moments that he has been next to me or in front of me in important moments of my life.

If there's one thing you watch today, make it this.#LaverCup | @rogerfederer pic.twitter.com/Ks9JqEeR6B

"So, I have been emotional to see the family, see all the people. Difficult to describe, but amazing moment."

Federer, whi himself was very emotional in his fareweel speech reciprocated his feelings.

"I'm so happy to make it through, the match was great, I couldn't be happier. It's been wonderful. "Of course, playing with Rafa on the same team, and having the guys all here, the legends... thank you.

With Nadal, Novak Djokovic and Andy Murray among those in the Team Europe corner, Federer said it was a special feeling to get to share his finish line with other icons of the sport.

"It's amazing, it really is," he said. "I didn't want it to feel lonely out there... to be saying goodbye in a team, I always felt I was a team player at heart.

"Singles doesn't really do that a whole lot, but I've had a team that travels with me around the world, that's been amazing with them. "It does feel like a celebration to me. I wanted to feel like this at the end, and it's exactly what I hoped for, so thank you," Federer added.