Federer and Nadal went head-to-head with American duo Jack Sock and Frances Tiafoe in the 20-time Grand Slam champion's last-ever match, but after taking the first set, the megastars lost a second-set tie-break as well as the match tie-break for a 4-6, 7-6 (7-2) 11-9 result.

The 41-year-old was then given the stage to reflect on his incredible journey to becoming one of the greatest players to ever grace the court. 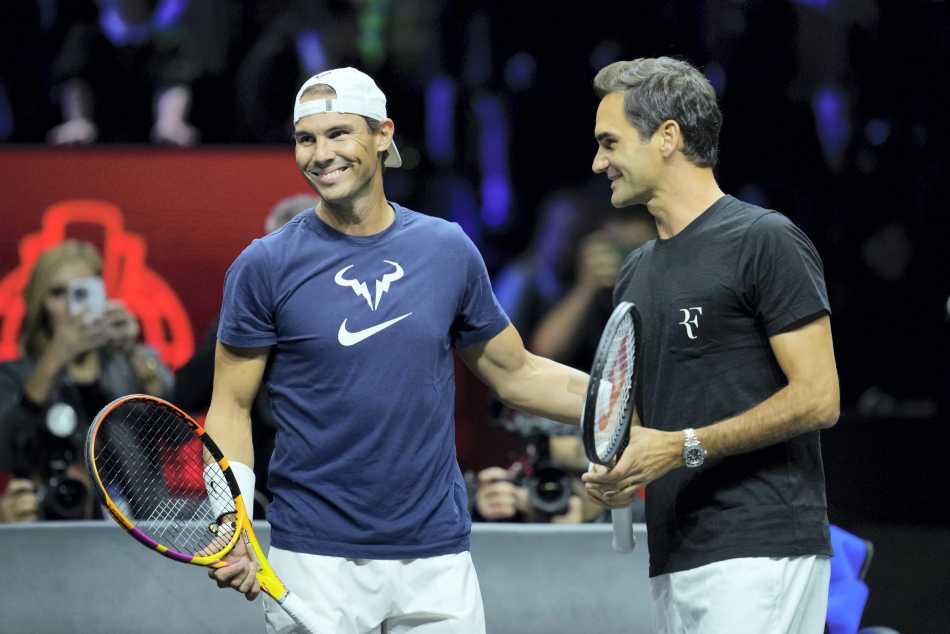 After sharing his fear that he would not be able to get any words out due to the emotions of the moment, he said it was a perfect way to wrap up a perfect career.

"It's been a wonderful day," he said. "I told the guys I'm happy, I'm not sad. It feels great to be here, and I enjoyed tying my shoes one more time, and everything was the last time.

"Funny enough, with all the matches, and having the guys, and being here with fans, family and friends - I didn't feel the stress so much, even though I did think something was going to go. Pop a calf, or lock my back or something.

"I'm so happy to make it through, the match was great, I couldn't be happier. It's been wonderful. "Of course, playing with Rafa on the same team, and having the guys all here, the legends... thank you."

With Nadal, Novak Djokovic and Andy Murray among those in the Team Europe corner, Federer said it was a special feeling to get to share his finish line with other icons of the sport.

It's amazing, it really is," he said. "I didn't want it to feel lonely out there... to be saying goodbye in a team, I always felt I was a team player at heart.

"Singles doesn't really do that a whole lot, but I've had a team that travels with me around the world, that's been amazing with them. "It does feel like a celebration to me. I wanted to feel like this at the end, and it's exactly what I hoped for, so thank you."

In the hindsight, the result of the match was of academic interest as the occasion was, after all, about the farewell itself. Or, better, the farewells, plural: Federer's to tennis, to the fans, to his competitors and colleagues. And, naturally, each of those entities' farewells to Federer.

Federer's farewell follows that of Serena Williams, the owner of 23 major singles championships, at the US Open three weeks ago after a third-round loss. It leaves questions about the future of a game he and she dominated, and transcended, for decades. For the time being, it's adios champion!