Being the best in the world is every athlete's dream: World No. 1 Kidambi Srikanth

By Chitrangada
Updated: Friday, April 13, 2018, 12:02 [IST]
oi-Chitrangada
Kidambi Srikanth is the first male player from India to be crowned World No. 1 in the modern era of the BWF Rankings

New Delhi, April 12: Star Indian shuttler Kidambi Srikanth's stellar rise to the top continued as he replaced Denmark's Viktor Axelsen to top of the BWF World Rankings on Thursday (April 12). Srikanth, who replaced the mighty Dane, became only the first male player from India in the modern era of BWF Rankings and third overall to achieve this exceptional feat after the legendary Prakash Padukone achieved the feat before the modern ranking was introduced and Saina Nehwal in 2015. 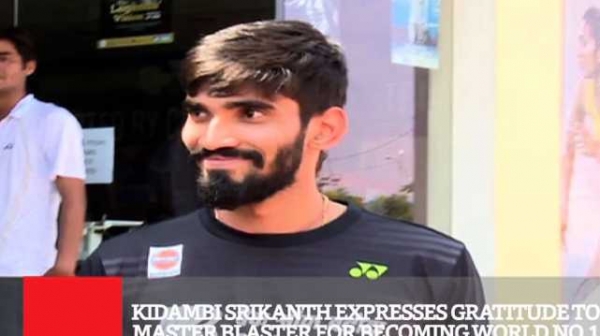 The Guntur lad has been going through a prolific run of form and was in contention to go to the summit of BWF ranking last year after winning four superseries titles. But injury during the fag end of the season saw him miss out on the opportunity to race ahead of the pack.

Kidambi Srikanth is the Number.1 ranked player in the world! He is the FIRST Indian male Badminton player to achieve this fabulous feat in modern ranking era! Congratulations Champ!🔥#KingKidambi pic.twitter.com/cnv6r2dJiz

He could have ended as the number 1 ranked player last year only had he reached quarterfinals in couple of year end tournaments but nevertheless he recovered well and stayed on course to achieve the top spot and turned in some sterling performances to become the World No. 1 shuttler.

Srikanth currently is in Gold Coast and has played a crucial role in India's historic gold medal win in the Commonwealth Games mixed team event where he beat Lee Chong Wei of Malaysia in the finals. He is currently atop with a total of 76,895 points while Viktor lost 1660 points to slip down to 75,470 points.

An elated Kidambi Srikanth, who qualified for the quarterfinals of the Commonwealth Games 2018 in Gold Coast is elated at the achievement and said, "It is a great feeling to be ranked no.1 in the world! Every athlete dreams of becoming the best in the world and I am happy that I have achieved it and more so because of being the only third Indian after Prakash Sir and Saina."

This one's for you @srikidambi
You have helped inspire a million others!! pic.twitter.com/yIS4XQUZZr

"I would really like to thank Gopi sir, BAI, the Government of India, Sports Authority of India and all who have believed in me and played a huge role in my success. I will do the best to retain the top spot for as long as possible and hope this achievement is able to inspire the next gen badminton players," he further added.

Congratulating the new world no. 1 Himanta Biswa Sarma, President of Badminton Association of India said, "It is a great thing for Indian badminton as a whole and I believe Srikanth's wonderful achievement will motivate other players to perform well and aim to go up higher on the rankings. I would like to congratulate him and believe that he will continue inspire the generations to come."

Ajay Singhania, the newly elected Secretary General of BAI also congratulated Srikanth and said, "I wish him all the best and the Indian contingent for the historic gold medal win at the Commonwealth Games played Down Under. "

The 25 year old Srikanth who trains at the Gopichand Academy in Hyderabad is a Padma Shri awardee and has won four superseries titles last year and became only the fourth shuttler in the world achieve this distinction. He is also the only Indian who has achieved the feat of defeating the Badminton legends Lin Dan and Lee Chong Wei.