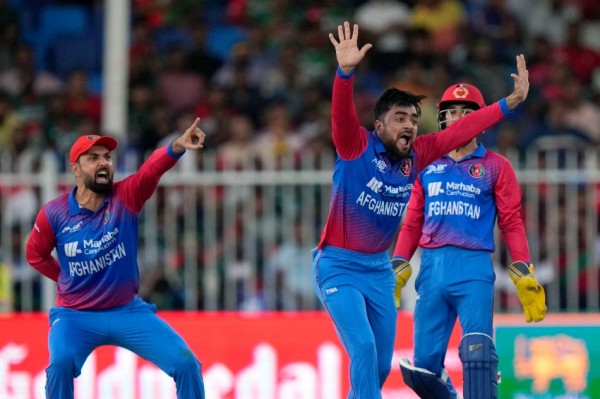 Najibullah Zadran and Ibrahim Zadran's unbeaten 69-run stand sealed a Super 4 spot and a 7-wicket win for Afghanistan over Bangladesh in a Group B match.

After Rashid Khan and Mujeeb Ur Rahman spell restricted Bangladesh to 127/7 in 20 overs, the Zadrans - Ibrahim (42* off 41 balls) and Najibullah (43* off 17 balls) completed the run chase with 9 balls to spare.

Najibullah walked in to bat when Afghanistan were in a spot of bother after losing skipper Mohammad Nabi with 66 to get off 42 balls. However, Najibullah, who joined Ibrahim in the middle, hit six maximums to ease the run chase.

For Bangladesh, skipper Shakib Al Hasan, Mosaddek Hossain and Saifuddin took one wicket each, but the Bangla bowlers could not stop Najibullah's onslaught.

Earlier, opting to bat first, Bangladesh could only manage to put on a total of 127 on the board in their quota of 20 overs despite a fighting unbeaten knock of 48 off 31 balls by Mosaddek Hossain.

Apart from Mosaddek, Mamudullah (25 off 27 balls) also got among the runs for Bangladesh as the pair shared a 46-run stand for the fifth wicket to take their team to a respectable total.

For Afghanistan, Rashid (3 for 22 in 4 overs) and Mujeeb (3 for 16 in 4 overs) were the top wicket-takers, while the other wicket was a run out in the final over of the Bangladesh innings.