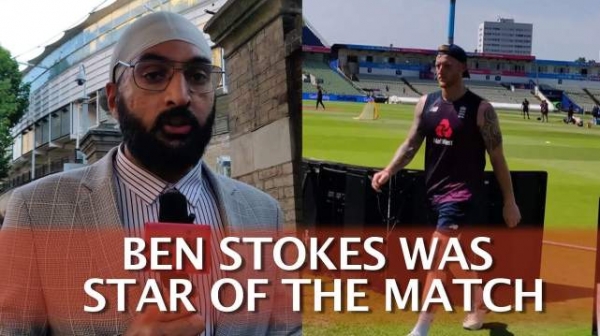 Ben Stokes Was Star Of The Match

London, July 17: Ben Stokes, it has been revaled that, had asked the onfield umpires to overturn the boundary from Martin Guptill's overthrow, a subject to much controversy after the ICC World Cup 2019 final between England and New Zealand.

Stokes' teammate James Anderson revealed it while talking in BBC's podcast the Tailenders. "The etiquette in cricket is if the ball is thrown at the stumps and it hits you and goes into a gap in the field you don't run," Anderson said.

"But if it goes to the boundary, in the rules it's four and you can't do anything about it.

"I think, talking to Michael Vaughan who saw him after the game, Ben Stokes actually went to the umpires and said, 'Can you take that four runs off. We don't want it'.

"But it's in the rules and that's the way it is. It's been talked about for a while among the players, potentially that being a dead ball if it does hit the batsman and veer off somewhere," the England paceman said.

"It was truly an incredible question to ask of the umpires, considering the gravity of the situation and the fact it would have left England struggling to force a tie after 50 overs of batting," he added.

Later Stokes had also told reporters how much he regretted the whole episode. "Playing against New Zealand is always a good event, they are good lads. I will be apologising to Kane (Williamson) for the rest of my life... It was written in the stars to happen for us," he said.