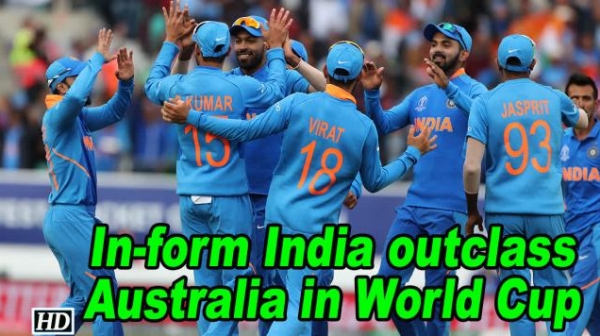 London, June 9: Shikhar Dhawan returned to form with a magnificent century as India consigned holders Australia to a 36-run Cricket World Cup defeat at The Oval.

Dhawan had not reached double figures in his previous three innings, but struck 117 from only 109 balls as India posted an imposing 352-5 on Sunday (June 9).

Virat Kohli (82 off 77) crafted his 50th ODI half-century after Rohit Sharma (57) become the second India player to reach the landmark of 2,000 runs in ODIs – the legendary Sachin Tendulkar being the other.

Hardik Pandya led a late onslaught as Australia suffered in the field and the world champions were unable to extend their winning streak in the 50-over format to 11 matches.

David Warner (56) and Steve Smith (69) made their second half-centuries of the tournament in a run-fest in London, but Aaron Finch's side fell short on 316 all out to lose their perfect record in the tournament.

Bhuvneshwar Kumar (3-50) and Jasprit Bumrah (3-61) were the pick of the bowlers as India – without Dhawan in the field due to a thumb injury – made it two wins out of two despite the quickest half-century of the competition from Alex Carey (55 off 35).

Dhawan back in the groove, Kohli oozes class

After a watchful start, Dhawan set about the Australia attack with exquisite and immense power, putting a recent run drought behind him by hitting 16 fours and bringing up his hundred with an overthrow following a mix-up with Kohli.

Captain Kohli was also watchful early in his latest classy knock, but used his feet superbly and punched the ball into gaps on both sides of the wicket, also hitting Mitchell Starc for two huge sixes.

Pandya (48 off 27) took advantage of being dropped by Carey before getting off the mark and went on to clear the ropes three times as India took 116 off the last 10 overs.

Finch was just starting to flex his muscles when he was short of his ground going for a second run after Bumrah and Bhuvneshwar had put the squeeze on early in the run chase.

The skipper was fuming following his dismissal for 36, which came after the fortunate Warner somehow survived when he inside-edged Bumrah's stumps but, not for the first time in this tournament, the bails stayed on.

Warner had ridden his luck, playing and missing on several occasions before he flicked Yuzvendra Chahal (2-62) to Bhuvneshwar at deep midwicket, leaving Australia 133-2 at the halfway mark.

Bhuvneshwar struck a huge blow by trapping Smith leg before – following a review – and also bowled Marcus Stoinis in an excellent 40th over.

Australia needed 115 to win off the last 10 overs and although Carey put on a late show, India were always ahead of the game.

Bumrah ensured there were no more fireworks from Nathan Coulter-Nile after also removing Usman Khawaj, with Adam Zampa falling to the final ball in an ultimately comfortable win for Kohli's men.