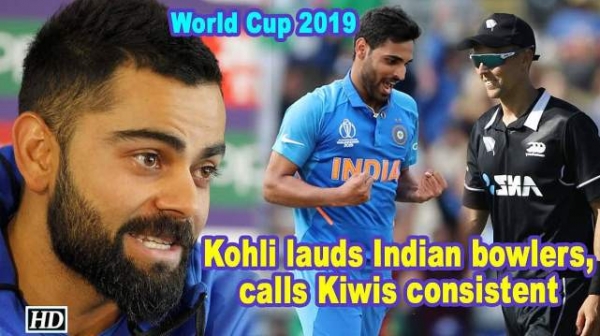 Bengaluru, May 27: India took on New Zealand in a warm-up game ahead of the ICC World Cup 2019 starting May 30 and lost by 6 wickets. However, they beat the Black Caps in their den 4-1 earlier this year and have an overall head-to-head lead of 55-45 with one game ending up in a tie and four remaining inconclusive.

The two teams will meet in the ICC Cricket World Cup 2019 on June 13 and the venue is Trent Bridge, Nottingham. India and New Zealand have been playing in the WC since 1975 and they have met seven times in all with New Zealand having a 4-3 lead.

Here is a brief history of the two teams' meetings in the World Cup:

India had their chances to make their first-ever semi-final in the WC when they took on New Zealand in the final group game in the 1975 edition. Captain Srinivas Venkataraghavan won the toss in the virtual quarter-final and elected to bat. India were reduced to 6 for 101 but 70 from Abid Ali at No.7 and Anshuman Gaekwad's 37 helped them lift themselves to 230 all out. Medium fast bowler Brian McKechnie took 3 for 49. India managed to pick six New Zealand wickets but an unbeaten century (114) from opener Glenn Turner saw the Kiwis romping home in the penultimate over. Abid Ali chipped in with two wickets as well. Turner was the man of the match.

New Zealand captain Mark Burgess won the toss and asked Venkataraghavan's India to bat. Sunil Gavaskar scored India's only half century (55) while Brijesh Patel scored 38 as the team slumped to 182 all out in 55.5 overs. Lance Cairns and Brian McKechnie took three wickets each. India prolonged the game till the 57th over even though they failed to take more than two wickets. Mohinder Amarnath picked the only wicket by a bowler while the other was run-out. Opener Bruce Edgar scored 84 not out while his partner John Wright hit 48. Edgar was the man of the match.

India won their first game against NZ in the World Cup when Kapil Dev's defending champions prevailed over them in a narrowly contested game in Bengaluru. Jeff Crowe won the toss and sent India to bat. Newcomer Navjot Singh Sidhu scored 75 while Kapil came up with 72 not out in just 58 balls at No.7 to take India to a competitive total of 252 for 7 from a precarious 114 for 5. Wicket-keeper Kiran More scored 42 not out off just 26 balls at No.9. Spinner Dipak Patel was the pick of the bowlers with 3 for 36. Ken Rutherford's 75 and Andrew Jones's 64 kept New Zealand in the hunt but lost the plot towards the end and managed 238 runs for the loss of 8 wickets. Spinners Maninder Singh and Ravi Shastri took two wickets each. Kapil was the man of the match.

India needed to win this game comprehensively to pip Australia to become table toppers and avoid Pakistan in the semi-final. Jeff Crowe on the toss and elected to bat first and New Zealand were doing good at 4 for 182. But they lost four wickets for just one run at this stage with Chetan Sharma picking a hat-trick, bowling Ken Rutherford, Ian Smith and Ewan Chatfield. Dipak Patel top scored with 40 as NZ finished at 221 for 9 in 50 overs. Sharma took 3 for 51. India needed to knock off the runs early and in came Gavaskar with 103 not out in 88 balls - his only century in ODIs. Krish Srikkanth scored 75 as India reached the target in the 33rd over with 9 wickets to spare. Both Gavaskar and Sharma were picked as the men of the match.

India were almost out of the fray and NZ topping the table when they met in Dunedin in the 1992 WC. Martin Crowe won the toss and elected to field and after opener Ajay Jadeja limped off the ground, skipper Mohammad Azharuddin (55) and Sachin Tendulkar (84) gave India a strong platform while Kapil Dev chipped in with a 16-ball 33 to take the team's total to 230 for 6 in 50 overs. Chris Harris took 3 for 55. The Kiwis' chase was powered by 73 from Mark Greatbatch and 67 not out from Andrew Jones and they overhauled the target despite facing a mini slump in the middle order. Manoj Prabhakar claimed 3 for 46 as NZ won by 4 wickets. Greatbatch was the man of the match.

India needed to win this game in the Super Six stage of the 1999 WC and Azharuddin won the toss and elected to bat. The Indian batsmen got the starts but none could transform their scores into a big one except Ajay Jadeja who scored 76 in 103 balls to be the top scorer. India ended up with 251 for 6 with Chris Cairns taking 2 for 44. Debasis Mohanty took 2 for 41 but opener Matt Horne's 74 and Roger Twose 60 not out down the order saw Stephen Flemings' Kiwis winning by 5 wickets in the 49th over. Twose was the man of the match.

Zaheer Khan wrecked the Kiwis after Indian captain Sourav Ganguly won the toss and elected to field. The left-arm seamer took 4 for 42 as New Zealand crumbled for 146 with their skipper Stephen Fleming top scoring with 30. New Zealand fast bowler Shane Bond generated some serious pace to make India 9 for 2 but Mohammad Kaif's 68 not out and Rahul Dravid's 53 not out won the game for India in the 41st over with 7 wickets to spare. None of the other NZ bowlers could maintain the pressure. Zaheer was the man of the match.