London, July 15: It was Reece Topley who grabbed centrestage at the Lord's as England handed India a crushing 100-run loss in the 2nd ODI of the three-match series on Thursday (July 15).

After the Indian bowlers restricted England to 246, Topley turned in the best figures by an England player in ODI cricket to guide England to a comfortable victory and level the three-match series 1-1. Topley became only the second England player to pocket six wickets in an ODI game. 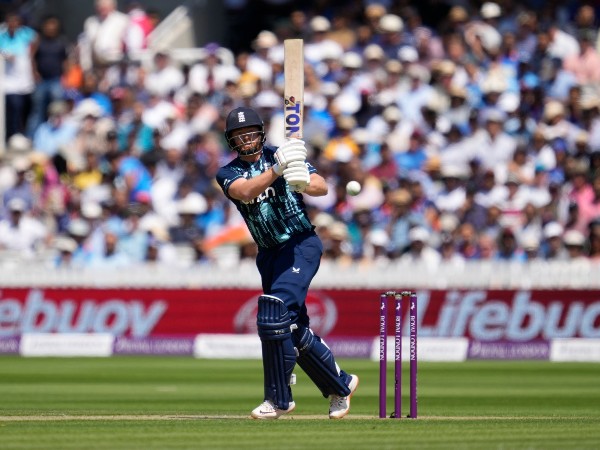 With just 246 to defend, Topley handed the hosts a strong start as he removed both openers cheaply. While India skipper Rohit Sharma fell for a duck, Dhawan fell for just 9 as India was reduced to 27/2 in 8.5 overs.

Coming back into the side, Virat Kohli looked to steady the ship, before David Willey, who impressed with the bat earlier, pocketed the prized scalp of Kohli. After the visitors top-order collapsed, Hardik Pandya and Suryakumar Yadav put up India's highest partnership for the day, scoring 42 off 54 for the fifth wicket.

But the England bowlers churned out a clinical show to bowl India out for just 146 in 38.5 overs. While Topley turned in the best figures of 6/24, Willey, Brydon Carse, Moeen Ali and Liam Livingstone picked up a wicket apiece to bowl out India.

Earlier, the Indian bowlers once again put up a strong show as the visitors bowled England out for 246 at Lord's.

After the pacers led the attack in the first ODI to bowl England out for a paltry 110, it was legspinner Yuzvendra Chahal who led the attack in the second game of the three-match series, to put India in the driver's seat. The Indian bowlers put up a comprehensive show as they restricted the hosts to under 250.

With the three-match series level, the decider is set to be played in Manchester on Sunday (July 17).

Check Out! Who has scored Most T20I runs for India against New Zealand
View Sample
For Quick Alerts
ALLOW NOTIFICATIONS
For Daily Alerts