Hardik, first, guided his team to a respectable total on the Wankhede track where batting in the second innings is comparatively easier. Along with Kieron Pollard, the junior of Pandya brothers added 45 runs in the final 12 deliveries as the Mumbai Indians' reached 170/5 in stipulated 20 overs.

From 119 for 4 in 17 overs, Mumbai recovered well to post 170/5 in 20 overs. Until 16th over, even posting 150 seemed was a distant dream for the Mumbai Indians for Chennai Super Kings bowlers kept things tight. But their woes in the death-overs were exposed when Dwayne Bravo leaked 29 runs from the final over and Shardul Thakur leaked 16 from the penultimate over. 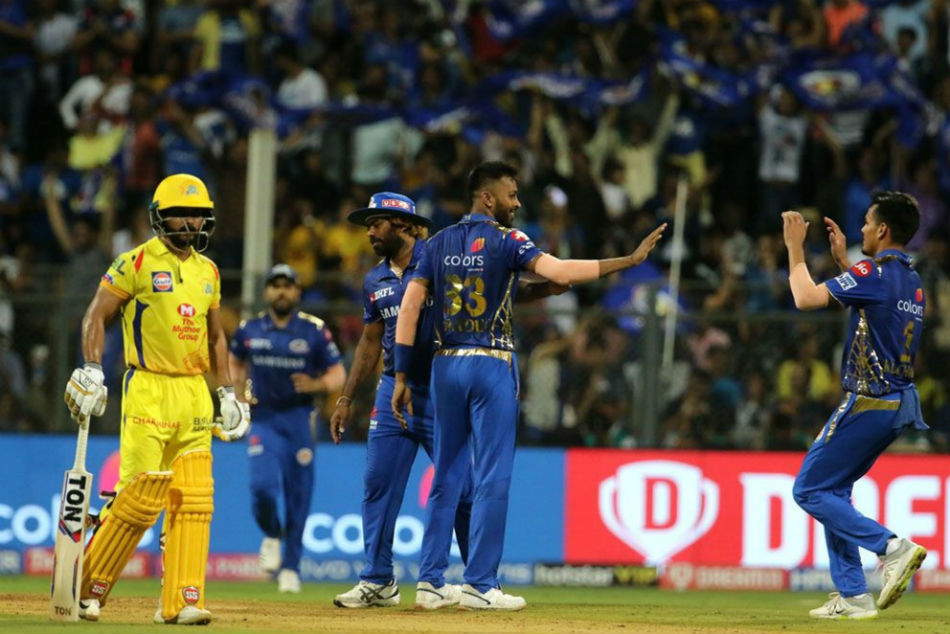 MI Vs CSK: As it happened

Suryakumar Yadav (59 off 43 balls) hit his sixth IPL half-century and played some classical shots all through his stay into the middle. The right-handed batsman hit eight boundaries and a maximum.

The first maximum of Mumbai innings came in the 15th over when Krunal Pandya hit Imran Tahir over long-on for a maximum. The senior Pandya brother too played a good hand with the bat and stitched a crucial partnership with Yadav. The left-handed batsman from Baroda was promoted at No. 4 by skipper and scored valuable 42 off 32 balls. Krunal's 62-run partnership with Yadav recovered Mumbai from the troubled waters after they lost Quinton de Kock (4), Rohit Sharma (13) and Yuvraj Singh (4) cheaply.

Krunal and Yadav's dismissal in the death overs proved to be a blessing in disguise for Mumbai as Hardik and Pollard (17* off 7) unleashed their fury over Chennai bowlers.

In response, Chennai were off to a disastrous start as they lost their openers Ambati Rayudu (0) and Shane Watson (5) within 3 overs. Rayudu's poor form in the tournament continued as the Hyderabad batsman was dismissed in the first over by a peach of a delivery from Australia pacer Jason Behrendorff.

Playing his first match in Mumbai Indians' colours, the tall Aussie pacer next removed Chennai's most consistent performer Suresh Raina (16). However, credit for Raina's wicket goes to Pollard who pulled off a stunning one-handed catch at the deep-point boundary to convert a certain six into a wicket.

The first ever team in #VIVOIPL to achieve this feat. Congratulations @mipaltan 👍👍 pic.twitter.com/rTxEOHQTJT

Veteran Lasith Malinga too bowled well as he returned with the figures of 4-0-34-3. The Sri Lanka speedster gave Chennai their second jolt in the run chase when he got Shane Watson caught at point region. This time again, it was West Indian Pollard who converted a boundary into a wicket at the point. It was an uncontrolled shot from the Australian and went straight into the hands of the tall West Indian.

Mumbai bowlers capitalised upon the good start and never allowed Jadhav and MS Dhoni to free their hands. Dhoni and Jadhav together revived the CSK innings and stitched a partnership of 55 runs between them. But as the pressure of the required rate kept increasing, Dhoni decided to take on the offensive in the 15th over but was immediately dismissed. He - who completed 4000 runs for CSK - was caught at square-leg by Suryakumar Yadav while trying to pull the all-rounder for a boundary.

Once Dhoni - who wasn't dismissed on the previous three innings for CSK in this season - was back into the dugout, Mumbai were convinced about the win and the rest remained just a formality. Hardik removed Ravindra Jadeja (1) in that very over to push the visitors towards the wall.

Another Milestone for #Thala @msdhoni 🦁

Jadhav (58) played a brilliant hand and notched up a fine half-century but the pint-size batsman's effort wasn't enough to take his team home. Dwayne Bravo - who pulled off a sensational run chase when these two teams last met each other in 2018 - too couldn't do much with the bat and was dismissed for 8 by a brilliant yorker from Malinga and Quinton de Kock taking a stunning diving catch behind the stumps. De Kock - who had a poor outing with the bat tonight - picked up four catches behind the stumps.

With 49 needed from the final six deliveries, Hardik bowled the 20th over and got his third wicket of the night in Deepak Chahar (7). Having the luxury of too many runs to defend, he conceded 11 from the next 5 deliveries and guided Mumbai Indians to their 100th win in the tournament.

A night to remember 🔥 Amazing support at the Wankhede 👏 Let's keep it going @mipaltan 👊💙 pic.twitter.com/ucjNsgbXUa

With this win, Mumbai would hope to return to winning ways and hope they pick up the upward curve from here on. As for Chennai, they would have a lot to ponder following their first defeat. Their batting looks weak and overly dependent on their skipper Dhoni. The likes of Rayudus, Watsons, Rainas, need to raise their bar and the CSK think tank should even consider strengthening their batting and bowling in the death overs. Since, both Rayudu and Watson are struggling with their form, Dhoni might even look towards Faf du Plessis or Murali Vijay to open the innings in their next games and sending Rayudu down to No. 4.

Talking about what went wrong for them, Dhoni said they started things well but a couple of dropped catches and misfields, and poor bowling in the death cost them badly.

"I think quite a few things went wrong for us. We started well, were right on the mark for the first 10-12 overs. Then, a few catches were dropped, a few misfields, the death over bowling wasn't great. We don't have bowlers who hit the deck, it was slightly tough on them," Dhoni lamented during the post-match presentation.

"We needed to build some momentum, but we need to know when to plan for those. It is a tough thing - this so-called momentum, it doesn't really matter, a good start from the bowlers will make things tight, once you set the tone, the game goes along in that flow," he added further.

Asked about the possible changes in the upcoming games, the 37-year-old said they will have to look at the wicket and then decide.

"We will have to see the wicket for the next game, we have to see the combination. Bravo has a hamstring injury, we don't have a few players, we already have some injuries, David Willey isn't there, he has his own problems, Lungi Ngidi isn't with us as well, we will have to look at the pitch and then decide on the right combination," he concluded.