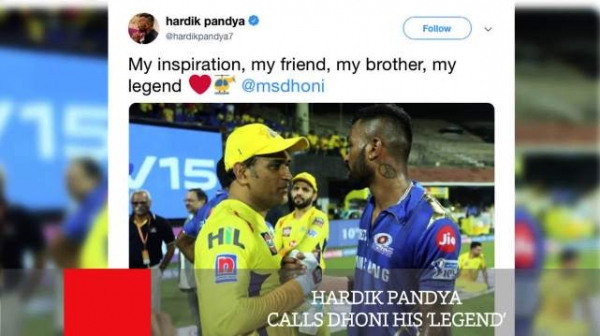 Chennai, May 7: Mumbai Indians outsmarted Chennai Super Kings by six wickets in the Qualifier 1 here on Saturday (May 7) to enter the final of the IPL 2019 to be played at Hyderabad on May 12. In the Qualifier 2 on May 10, Chennai will face the winner of the Eliminator between Delhi Capitals and Sunrisers Hyderabad at Visakhapatnam.

MyKhel takes a deep look into the match between Chennai and Mumbai at the M A Chidambaram stadium.

The 22-yard strip at Chepauk has been sluggish from Day 1 of the IPL 2019. Remember the inaugural match between Chennai and Royal Challengers Bangalore when the Virat Kohli-led side crashed to a sub-100 total. The pitsch never changed its character throughout the tournament and the final match of the season at this venue was no exception. Mumbai spinners Rahul Chahar, Krunal Pandya and Jayant Yadav never allowed any freebies to Chennai batsmen and also jettisoned Faf du Plessiss, Shane Watson and Suresh Raina within the Power Play segment. Chennai never really recovered from 32/3 in 6 overs, ending up at 131/4 and Mumbai made a clinical chase to emerge the winner.

A chance came in Chennai's way when Yadav was on 11. A mistimed, uppish drive was within Murali Vijay's range but even a desperate dive did not help him grab the catch. Catch spilled. Match spilled. Yadav then made an unbeaten 71 off 54 balls with 10 fours to guide Mumbai home. He negated Chennai spinners, particularly veterans Harbhajan and Imran Tahir, that nullified the home side's faintest hopes of making a match of it. Yadav and Ishan Kishan milked 80 runs for the match-turning third wicket after captain Rohit Sharma and Quinton de Kock departed early.

Dhoni has been Chennai's batting bulwark this season. It won't be an exaggeration to say that the Jharkhand man singlehandedly carried the Chennai batting in IPL 2019. His average of 122 suggests a massive one man effort. And more importantly, Dhoni has an alien strike rate of 261 in the final two overs of a match. He arrived at the crease in the 13th over after the dismissal of Vijay. At the best of times, Dhoni is a slow starter and on this night too Dhoni began in a slow tempo, giving the fans the hopes of an explosion later. But the Lasith Malinga, despite getting hit for two successive sixes, and Jasprit Bumrah did not give Dhoni balls in his hitting arc as often as he would have liked. Once Dhoni was silenced, Chennai failed to make the late charge.

This was Mumbai Indians' third win over Chennai this season alone. Never has any other team managed to dominate Chennai at their home like that and overall too this was the Rohit-led outfit's sixth IPL win over Chennai at Chepauk. It will swell to 7 if you count Mumbai's win in the 2011 Champions League T20. With this win, Mumbai also extended their overall tally of wins over Chennai to 16 as against 11 defeats. Dhoni has mastered the art of conquering the odds and he needs to find a solution to this vexed Mumbai question.