Bengaluru, April 24: For once, the batting and bowling units of Royal Challengers Bangalore (RCB) worked in unison and it reflected in a smooth 17-run win over Kings XI Punjab (IPL) in an IPL 2019 match at the M Chinnaswamy stadium here on Wednesday (April 24).

After their batsmen led by inimitable AB de Villiers came up with knocks of varying degree of quickness to carry the team to 202 for 4, the Royal Challengers Bangalore bowlers produced a clinical effort to restrict Kings XI to 185 for 7. It was RCB's fourth win of the season.

There were moments when Kings XI appeared to throw a big challenge to RCB with a power chase. Chris Gayle, KL Rahul, Mayank Agarwal and Nicholas Pooran played nice little cameos but the volume of runs that RCB put on board was too much for Kings XI to overhaul this night. 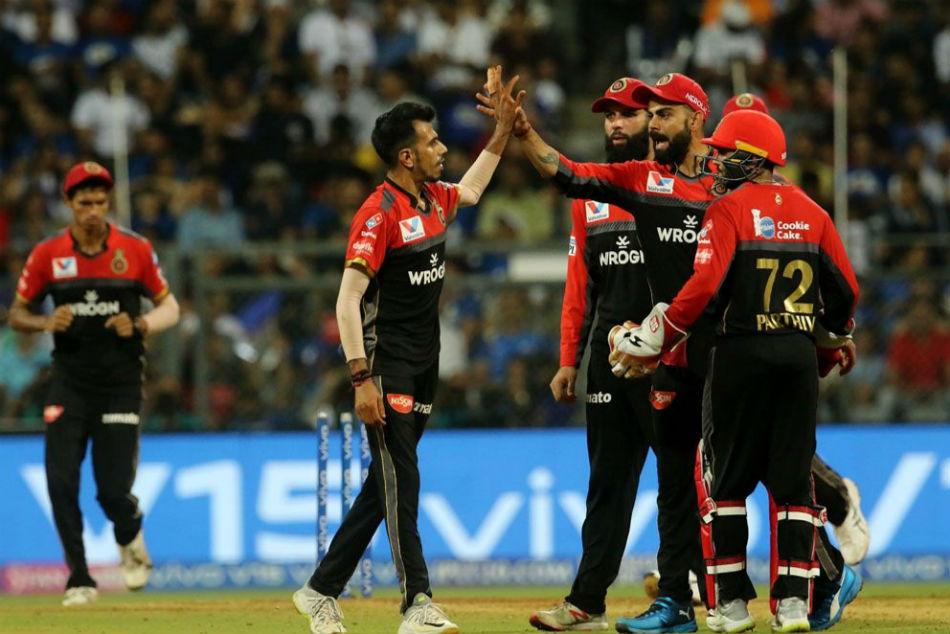 RCB vs KXIP: As it happened

When victory was in sight and the wickets were tumbling, you get these reactions from the @RCBTweets skipper 🔥#RCBvKXIP pic.twitter.com/WMaEOT523y

The Royal Challengers should also thank Umesh Yadav for bowling two wonderful overs at death. The 18th over in which he conceded just six runs and the final over in which he took two wickets to ensure that there was no repeat of the final over drama that gripped the match against Chennai Super Kings (CSK) a couple of days back at the same venue. In fact, the Kings XI managed just 11 runs in the last three overs bowled by Umesh and Nitin saini, losing three wickets.

#Navdeepsaini The more I see of him, the more I think why he is not there in the World Cup squad..

Earlier, Royal Challengers innings went through two different spaces. They began in a rousing fashion despite losing Virat Kohli, who was dropped by Hardus Vilojen off Mohammed Shami, early. However, Shami got his man soon when he deceived Kohli with a slower delivery, which was chipped to Mandeep at covers. That did not slow down Royal Challengers as Parthiv Patel and AB De Villiers, the former in particular, went about run gathering at a breakneck pace.

Parthiv was severe on anything short or even remotely full, and there were quite a few on his hitting arc as Royal Challengers raced to 70 for one in six Power Play overs. But the introduction of spin in the form of Murugan Ashwin and skipper R Ashwin altered the course of the game. M Ashwin got rid of Parthiv, a thick outside edge ending in the hands of his namesake at covers.

The dismissal of Parthiv followed by a period of meltdown and wicket-loss for Royal Challengers. Moeen Ali and Akshdeep Nath were jettisoned in the space of 10 balls and the runs that flowed in a like a stream suddenly became a trickle. De Villiers and Marcus Stoinis did not hit out from the word go, respected the on the money Kings XI bowlers.

Royal Challengers Bangalore - after losing their first six matches - have now won four out of their last five. All four wins have been recorded in the last over of the match! #RCBvKXIP #IPL2019

In fact, the Royal Challengers looked to get restricted for a below-par total at the end of the 17th over at 138/4 with three overs to go was not an ideal situation on a rather placid track. But with De Villiers and Stoinis at crease, the home side might have cherished the hopes of reaching a total in the vicinity of 180.

Scoreline does not reflect how close this match acutally was. Punjab’s sparkling bid to chase down 202 fizzled out only in the last over. RCB reap reward of spectacular batting by ABD, but bowling and fielding could be better

But De Villiers unfurled some of those shots that earned him the moniker of Mr 360 as pace of run gathering picked up dramatically. Stoinis too gave AB good back up with occasional big hits as an incredible 64 runs rushed in the last 18 balls. The onslaught helped Royal Challengers Bangalore convert a middling total to a more than competitive total that proved good enough to earn their fourth win of IPL 2019 and move up to 7th in the table for the first time this season.