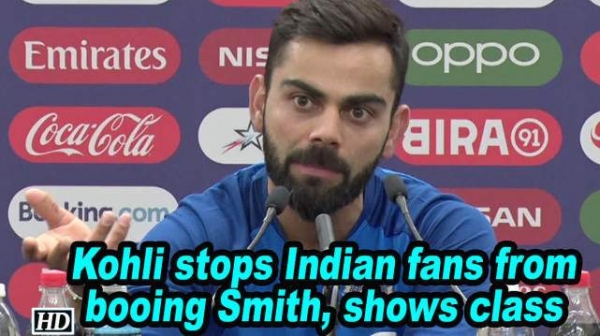 London, June 9: Australia coach Justin Langer wanted English spectators to show some restraint but it was Indian fans who were less than charitable in their behaviour, consistently booing Steve Smith during the World Cup match on Sunday.

Smith, who was banned for one year on charges of ball tampering, has so far received hostile reception from the English crowd.

When India fans started getting stuck into @stevesmith49, here's how #ViratKohli responded to them.

And here's the reaction from the Australian!

However, it was a bit weird as the capacity Indian crowd started with "cheater, cheater" boos as soon as he took strike. But what was heartening to see was rival captain Virat Kohli coming to his rescue when India were batting.

Just after Hardik Pandya got out and Mahendra Singh Dhoni was about to enter the ground, Smith moved towards third man area and immediately the booing started. Sensing Smith's discomfort, Kohli gestured the crowd to stop booing the former Australia captain and instead cheer him. The booing stopped immediately.

Wow. How good is this from Virat Kohli? Steve Smith is sent to field on the boundary, and immediately cops the most hideous boos from the Indian fans. So Kohli turns to that stand and gestures for them to clap Smith. #CWC19 pic.twitter.com/GBTPaolOXh

Mallya's presence sticks out like sore thumb among Archer, Jagger: Any marquee cricket match in London attracts a few celebrity cricket fans. Novelist Jeffrey Archer and the Rolling Stones frontman Mick Jagger were seen enjoying a good contest. But the moment the ICC World feed showed the fugitive Indian businessman Vijay Mallya and his son Siddharth, there was a hushed silence.