Bengaluru, October 13: Dashing opener Shafali Verma was back amog runs as India crushed minnows Thailand by 74 runs to storm into the final and remain on course for a record-extending seventh women's Asia Cup title in Sylhet, Bangladesh.

The win over Thailand took India to their eighth straight Asia Cup final -- four each in One-day International and T20 formats.

It may be recalled that before 2012, the tournament was a 50-over-a-side affair. 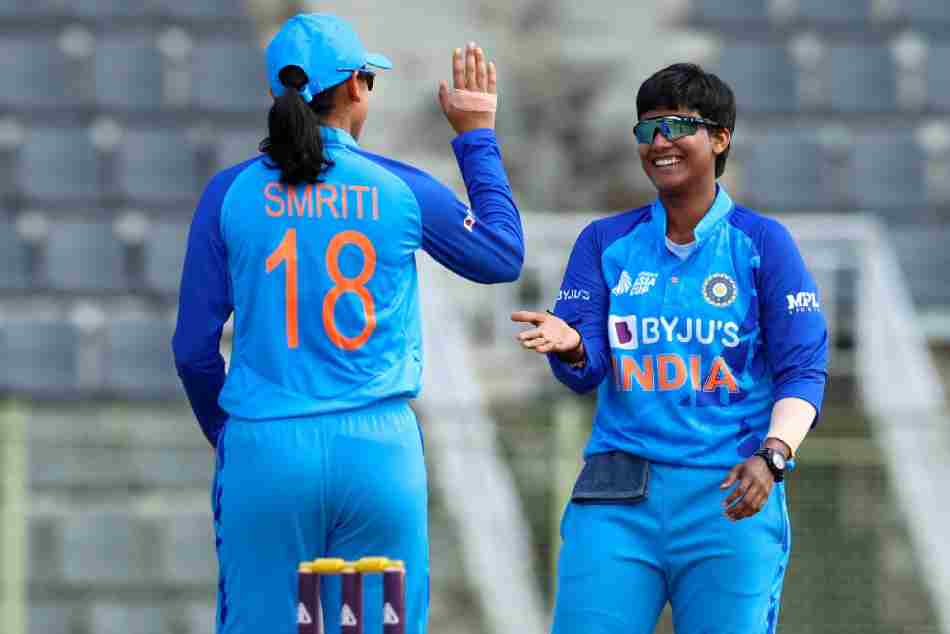 The semifinal contest against Thailand was always expected to be a cakewalk for India and it turned out to be so. India posted 148 for six after being sent in to bat and then restricted Thailand to 74 for nine in the lop-sided contest.

Chasing the target, Thailand were never in the hunt as they lost wickets at regular intervals. The Thai women, however, fared much better than their previous outing against India in the league stage, where they were crushed by nine wickets.

In that match, the Indians bundled out Thailand for just 37 runs in 15.1 overs and then chased down the target with consummate ease. On Thursday, the Thai women gave a better account of themselves with the bat despite being reduced to 21 for one in the eighth over.

Deepti Sharma (three for seven) did most of the damage with her off-spin, picking up the first three Thai wickets in consecutive overs.

Captain Naruemol Chaiwai (21) and Nattaya Boochatham (21) showed some resistance with the bat with a 42-run stand for the fifth wicket but the asking rate was too tall.

Earlier, invited to bat, Shafali was at her destructive best, top-scoring for India with a 28-ball 42 with the help of five boundaries and one hit over the fence. Together with vice-captain Smriti Mandhana, Shafali shared 38 runs in 4.3 overs before the former hit a low full toss from Phannita Maya straight to Onnicha Kamchomphu at mid on.

Shafali continued her attacking batting but was the next batter to depart, miscuing off-spinner Sornnarin Tippoch's flighted delivery to Thailand skipper Naruemol Chaiwai at short midwicket. Most of the dismissals were gifts to Thai bowlers as the Indian batters were guilty of giving away their wickets after getting starts.

Jemimah Rodrigues (27) was the next to loft one straight to Rosenan Kanoh at long-on off Thipatcha Putthawong. Tippoch then had two wickets in successive overs to reduce India to 132 for five in the 18th over. First, she caught wicketkeeper Richa Ghosh plumb in front of the wicket and an over later, got the big wicket of skipper Harmanpreet Kaur as the batter tried to clear the cover boundary.

Harmanpreet, who returned to lead the side after missing out two matches due to a niggle, looked in good nick and laced her 30-ball 36 with four hits to the fence.

Towards the end, Pooja Vastrakar hit a quick 13-ball 17 with the help of a six to take India close to the 150-run mark.

The Final of the tournament - which saw participation from seven countries - will be held on October 15.