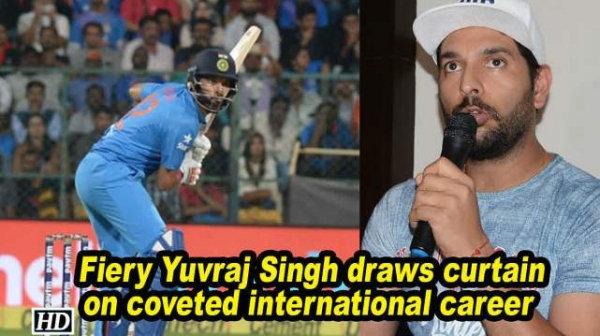 Bengaluru, June 10:Yuvraj Singh ended his storied cricketing career on Monday (June 10) while making a formal announcement in a press conference in Mumbai. He will forever be remembered as one India's best limited over players and a pioneer in bringing a new attitude and approach to fielding. Here's MyKhel picks five best moments from Yuvraj's career that lasted 19 years.

It was the first time, the world saw the skills of Yuvraj Singh. He played a sparkling innings that contained 12 fours against an Australian attack that featured the likes of Glenn McGrath, Brett Lee and Jason Gillespie. His innings gave India a boost and took past the 260-run mark, eventually a match-winning total. It was his debut tournament for India and ever since Yuvraj remained a main pillar of India's one-day schemes.

Perhaps, the innings that defined the spirit of Yuvraj. Once England made 325, a victory seemed far away for India. But after a rollicking start given by Sourav Ganguly and Virender Sehwag, Yuvraj kept India's chase on in the company of Mohammed Kaif. The 63-ball innings ensured that India emerged winners with three balls to spare.

It was the inaugural World T20 held in South Africa and India under MS Dhoni emerged champions. Yuvraj took on Stuart Broad and hammered him all over the park for six sixes in an over to join a very elite club. It remained a signature Yuvraj moment ever since and he also emerged player of the tournament.

India emerged champions at home after that epochal 1983 triumph in England. Yuvraj led India's campaign from the front with 362 runs and 15 wickets to emerge player of the tournament. It was only fitting that the left-hander was at the other end when Dhoni sealed the triumph with a massive six of Nuwan Kulasekhara at the Wankhede Stadium.

5. The fight against cancer

Soon after the 2011 World Cup triumph, Yuvraj was diagnosed with cancer. He had to undergo treatment including chemotherapy and everyone thought the cricketing career of Yuvraj was over. But he fought back bravely and resurrected his playing career and since then he has been in the forefront of the battle against the lethal disease. It was as big a victory as any he registered on the field. Now that he has retired from cricket, we may see him working more to help the needy.