By Rob Lancaster
Updated: Friday, January 22, 2021, 8:59 [IST]
omnisport-MyKhel Team
Liverpool's title defence suffered another blow as they lost at home in the league for the first time in three years and 273 days.

Roberto Firmino, Sadio Mane and Mohamed Salah were all on target in the clinical rout at Selhurst Park, after which Jurgen Klopp said: "It was really difficult to play against us." 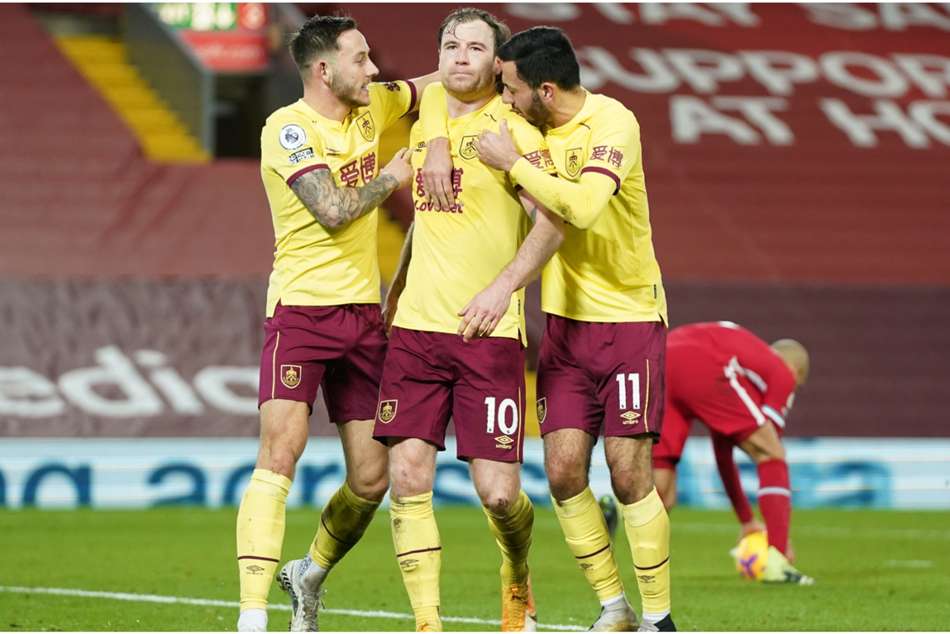 Fast forward to January 21 and, following a stunning 0-1 loss to Burnley at Anfield, Liverpool were left to wonder just where it had all gone so badly wrong.

For a fourth successive outing in the league they had failed to score, while the shock result sees them stuck in fourth position in the table, six points behind leaders Manchester United.

Never mind moving through the gears: the wheels have well and truly come off.

2 - This was Burnley’s second Premier League win away against the reigning champions (also v Chelsea in August 2017). Indeed, since the 2017-18 season, Burnley are the only side with two away league wins over the reigning English champions. Grind. pic.twitter.com/fBkQdO7sps

Ashley Barnes' penalty condemned the Reds to a first home defeat in the league since April 23, 2017. It had been three years and 273 days since former Liverpool player Christian Benteke struck twice for Palace in a 2-1 triumph.

The run of 68 games unbeaten was the second longest in English top-flight history. During the streak, there were 55 wins, 176 goals scored and 36 clean sheets. A total of 43 players were used, too.

Joel Matip, Georginio Wijnaldum, Firmino and Divock Origi were also in the starting XI that were beaten by Palace, managed by Sam Allardyce, nearly four years ago, while Trent Alexander-Arnold came on as a late substitute.

Since Mane's early strike in the 1-1 draw against West Brom on December 27, Liverpool have registered 87 shots in the Premier League without managing to find the net. Eighty. Seven. Shots.

It was not for a lack of trying against Burnley, admittedly. They had 27 total attempts, their most in a single league match without scoring since April 2013 versus Reading (28).

The absence of Jordan Henderson did not help. Even prior to kick-off, Liverpool had lost more of their 11 Premier League games without their captain (3) than they had in 45 games with him (2) since the start of last season.

13 - Liverpool had 13 shots in the opening 45 minutes against Burnley; their most in the first half a Premier League game without scoring since December 2017 v Leicester City (also 13). Wasteful. pic.twitter.com/UON74lCa7C

This is not yet uncharted territory for Klopp at Liverpool; he previously went five league games without a win between January and February in 2017.

That barren run four years ago included fixtures against Sunderland and Hull City – clubs now in the third tier of English football – and a home defeat to current Championship side Swansea City, who were celebrating at Anfield thanks to goals from Fernando Llorente (two) and Gylfi Sigurdsson.

However, Klopp has never previously gone four without a goal during his Reds tenure. The previous time that happened in his coaching career was while in charge of Mainz, who suffered a drought in the Bundesliga late in 2006.

POPE SAVES ALL AS REDS PAY THE PENALTY

Nick Pope excelled when Burnley ended Liverpool's 100 per cent home record in their title-winning campaign – and the goalkeeper was once again in outstanding form on Merseyside.

The England international made six saves to keep a clean sheet, having produced eight in his side's 1-1 draw in July at the same ground. Since the start of the 2019-20 season, no keeper has made more saves against a single opponent in the Premier League than Pope against Liverpool (19).

Barnes' penalty was the second spot-kick Liverpool have conceded at home this season too – they had only given up two penalty goals at Anfield under Klopp before 2020-21.

There is plenty for the German to ponder, then. While retaining the trophy is far from out of reach, what appeared to be a temporary blip is in danger of turning into a full-blown crisis.