Bengaluru, July 9: Defending champions India will be led by goalkeeper PR Sreejesh for the 18th Asian Games beginning in Indonesian cities of Jakarta and Palembang on August 18, while drag dragflicker Rupinder Pal Singh and forward Akashdeep Singh return to squad.

Midfielder Chinglensana Singh Kangujam has been named as Sreejesh's deputy of the 18-member squad announced by Hockey India, which also features the experienced Sardar Singh.

Sardar will will have the support of Manpreet Singh, Simranjeet Singh and Vivek Sagar Prasad in the midfield. 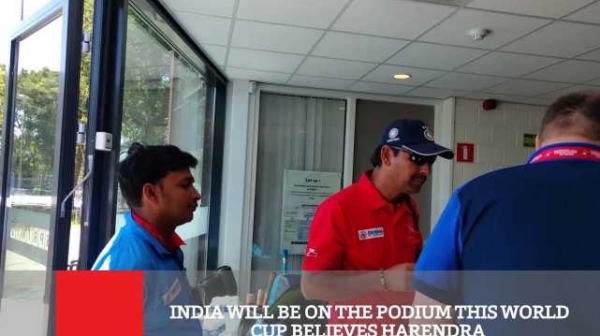 India Will Be On The Podium This World Cup Believes Harendra

India's forwardline will see Akashdeep making a return to the squad. Experienced SV Sunil, Mandeep Singh, Lalit Kumar Upadhyay and Dilpreet Singh have been named in the squad.

The team's defence will be strengthened with the return of experienced dragflicker Rupinder who was rested for the Champions Trophy, in which India lost to Australia on penalties in the final held at Breda, the Netherlands, recently.

Hockey India has announced an 18-member Indian Men's Hockey Team on 9th July, who will go on to represent the nation at the 18th Asian Games to begin in Jakarta and Palembang on 18 August. Read here: https://t.co/TxO5QentiD #IndiaKaGame

Speaking about the team composition, chief coach Harendra Singh said, "We've a great mix of players who've shown their abilities in the recent tournaments. It's unfortunate that we'll be missing out on Ramandeep Singh's experience as he is ruled out due to a knee injury for which he underwent surgery recently.

"But it's good to have Akashdeep (Singh) back in the mix. Both Rupinder and Akashdeep have remained in camp when the team was away in Breda and have had good match practice against Bangladesh over the past week and are raring to go."

The 18-members who returned from Breda have joined the rest of the core group at ongoing national camp at Sports Authority of India centre in Kengeri in the outskirts of the city, after a short five-day break.

India had defeated archrivals Pakistan en route to clinching the 2014 Asian Games held at Incheon, South Korea, a win which helped them book a berth for the 2016 Rio Olympics.

Harendra added thet he was eyeing an encore this time so as to book tickets for the 2020 Tokyo Games.

"While the practice matches against Korea will have a mix of players from the core group, the matches against New Zealand will be played by the 18 members who are selected for the Asian Games. I believe this will be good for the team in their preparation for the Asian Games where we'll certainly go for the gold to qualify for the 2020 Tokyo Olympics," added Harendra.