By Sajith B Warrier
Updated: Wednesday, July 18, 2018, 11:47 [IST]
oi-Sajith B
Susi Susanti holds the torch before handing over to Mary Kom

New Delhi, July 16: The 2018 Asian Games' torch relay began its 18,000km journey from the National Stadium amidst chaos as many Indian athletes had to take a ride on the media bus after being left standed at the venue.

The journey began at the country's capital where the Games' flame was lit for the first time at the inaugural edition in 1951.

We have arrived at Major Dhyan Chand Stadium, New Delhi, India, to light the flame that will officially start the #AsianGames2018 Torch Relay. This stadium is the birthplace of Asian Games in 1951. pic.twitter.com/6dljvHCIog

The flame will now travel to Indonesia, where it will be merged with a sacred flame from Merapen, Central Java, at the ancient Hindu temple of Prambanan on July 18.

From there on, the torch will pass through 54 cities in 18 provinces across the archipelago before reaching Jakarta for the opening ceremony on August 18.

The multi-sporting event will run from August 18 to September 2 in Jakarta and Palembang. It is the first time that two cities are co-hosting the Games.

One more step until the Torch Relay begins its long journey. Everyone has been waiting for this great historical moment to come and to finally arrive in the heart of Jakarta. The #AsianGames2018 Opening Ceremony will take place in Gelora Bung Karno Main Stadium on 18 August 2018 pic.twitter.com/wQHwRQaxim

Elite Indian athletes including hockey stars PR Sreejesh, Sardar Singh ace shooter Jithu Rai and paddler Sharath Kamal were left stranded at the National Stadium, but did not mind taking a shared transport with the covering media from the stadium to India Gate and back.

"The whole thing was a bit chaotic but it is okay. We did not mind it so much," said a top athlete, who was part of the ceremony.

Indonesian badminton legend and Barcelona Olympic gold medallist Susi Susanti handed over the torch to India's five-time world boxing champion MC Mary Kom, who ran with it briefly before passing the baton to other Indian athletes. 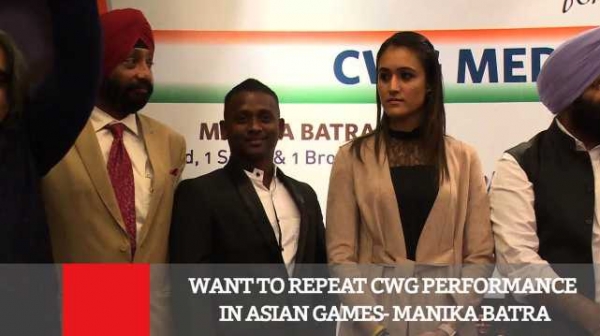 Sreejesh, Sardar Kamal, Jitu and paddler Manika Batra were among the athletes who got their hands on the torch.

Proud to be part of the Asian Games 2018 Torch Relay ceremony in Delhi today pic.twitter.com/liTlFmx2lu

"India always holds a special place in the hearts of sportspeople in Asia, because the nation, specifically New Delhi, was the birthplace of the Asian Games. The torch relay today will bring the two countries even closer," said Erick Thohir, chairman of Indonesia Asian Games Organising Committee (INASGOC).

He also informed that a record 16,920 athletes and officials have been registered for the Games. Overall, more than 11,000 athletes will be vie for medals in 40 sports and 67 disciplines.

"Asian Games are now even bigger than the Olympics. As far as the number of sports are concerned, the OCA needs to decide on that," added Thohir.