Manila, November 29: ONE Women's Atomweight Muay Thai World Champion Allycia Hellen Rodrigues has said "fighting for myself and my son" is the motivation behind her to defend the World title.

Rodrigues will step into the ONE Championship Circle for the first time since August 2020 when she defends the title against interim titleholder Janet Todd at ONE Fight Night 5: De Ridder vs. Malykhin this Saturday (December 3).

Rodrigues took a break from competition following her World Title victory against Stamp Fairtex to focus on starting a family.

Now, as she prepares for her return, the Brazilian star says that she has taken inspiration from other fighting moms and believes she will be fighting with a new drive.

"I never thought it would be the end because I've seen several fighters become mothers, and they continued their careers. So, I knew it would never be a problem for me either," Rodrigues said.

"Angela Lee was also pregnant, [and] she returned and continued to be the World Champion. It changes nothing. It's just a break from work.

"Now I'm stronger because I fight for myself and for my son. I want him to be proud of me. Whenever I look at him, I have a lot of strength to go even further. I know what I'm doing will be very worthwhile for us and for our future." 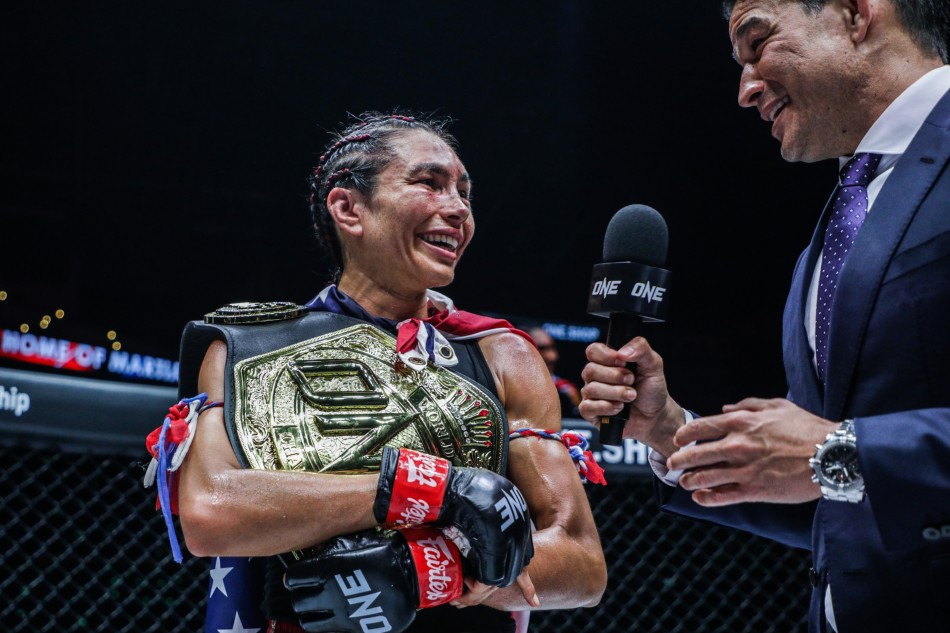 Parenthood is a lifestyle shift for anyone, and professional athletes are no exception. The time required to stay at the top of their sport, coupled with the commitment of a new family, makes for a difficult balancing act.

But Rodrigues has made that choice, and the sacrifices that come with it, so now is the time to reap the rewards.

"This victory today is going to be very important for me because I've been without a fight for two years. But I want to prove that it makes no difference. I'll continue to be the champion because I work every day to stay on top," she said.

"I know it ain't easy, but it's not impossible. If you work hard every day, you are capable of anything. I'll think that all the suffering I've been through since I got back to training was worth it.

"Every drop of sweat, pain, and tiredness that I felt in my body, every moment I lost with my son, all this was worth it. Then it will be just joy with the result of my work."

The atomweight Muay Thai queen admits there were times when she worried about her ability to return to title-winning form after 28 months away.

However, those fears have since subsided, and Rodrigues is ready to show the world why she is the divisional queen when she squares off with American striking legend "JT".

"Starting over from scratch is not easy because the body changes with pregnancy, but now I feel good again to compete. I've been out for a while, but you can expect the best of me," she said.

"I'm very anxious because I haven't fought in a long time, but I'm training hard, and I'm very confident. I trust in my team, in my training, and especially in myself.

"I only did one fight on ONE, and I haven't shown much of myself yet. I'm excited now because I want to show you a lot more. Show why I'm the champion, and I will remain the champion!"