Bengaluru/Doha, September 22: Ace Indian cueist Pankaj Advani grabbed his 24th world title and second crown in as many weeks when he triumphed at the International Billiards and Snooker Federation (IBSF) sanctioned Six-Reds Snooker World Cup in Doha with a hard-fought 7-5 victory over Pakistan's Babar Masih.

Earlier, in a virtual repeat of Asian Snooker Championship final, he defeated Iran's Amir Sarkhosh 6-3 in the last-four encounter. 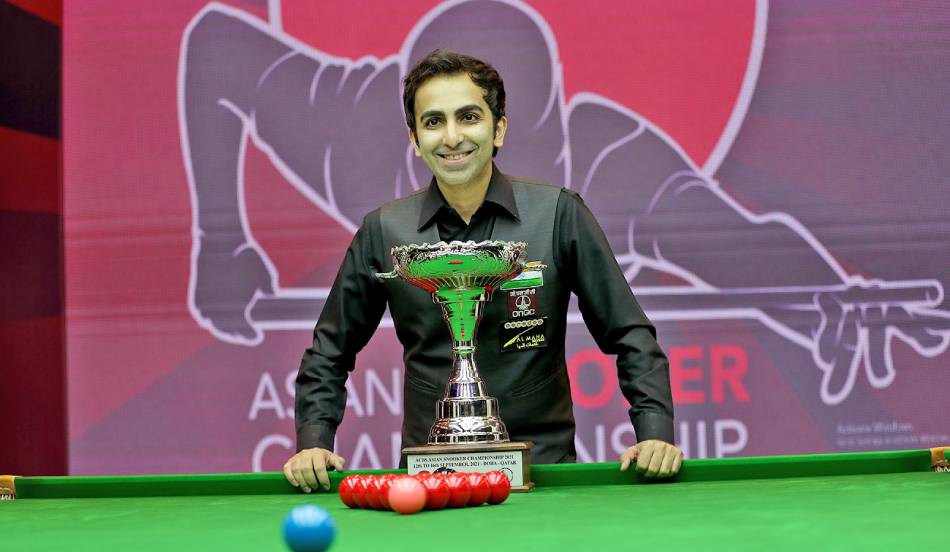 The 36-year-old signed off from Doha in style where he ensured a clean slate of wins over the last fortnight across two international championships -- Asian Snooker Championship and Six-Reds Snooker World Cup.

The Six-Reds World Cup was the first IBSF-sanctioned event being held after the coronavirus (COVID-19) pandemic enforced break of almost one-and-a-half years.

"I'm living a dream. Being away from the table for so long, these two back-to-back triumphs assure me that my hunger and competitive skills haven't diminished," Pankaj said.

"Very fortunate to win both as I'm aware there's still a lot of work to put into my game once I return. Happy to return home tomorrow with two gold medals for my country," added Pankaj, who is the national champion in the Six-Reds format.

Pankaj, who won his 11th Asian title last week, started the final with a comfortable 42-13 win in the opening frame. Babar drew parity by winning the second 38-14.

In the third frame, Pankaj made a foul that only he knew he had committed. The Bengaluru-based cueist won the third (53-0) and fourth (42-19) in quick succession to go 3-1 up.

The Pakistani cueist, in no mood to play second fiddle to his worthy opponent, crafted a wonderful 50 plus break in the fourth frame which he won 53-1 to bridge the gap. Pankaj shifted gears and then took the next three (47-17, 44-0, 36-3) to be within one frame away from getting his hands on his 24th world winner's trophy.

Not going to go down without a fight, Babar brought the match to a tight corner by winning the next three frames (43-0, 46-12, 59-15) as a strong response. At 6-5, it was touch and go. Babar had found his touch and Pankaj had more to lose at this point being within striking distance of the finish line. But a classy 32 break off the cue of the multiple world champion put paid to Babar's hopes as he won 53-5 to lay his hands on to the trophy.

The victory helped Pankaj continue his winning run in Doha, which has always been a happy hunting ground for the Indian cueist ever since he won the billiards gold at the 2006 Asiad which was held at Qatar Billiards and Snooker Federation's main facility at Mumtazah area.

IBSF President Mubarak Al Khayarin awarded the winners as curtains came down to a fortnight of high-quality snooker.