Melbourne, December 12: Tiger Woods roared but he and the United States were upstaged by the Internationals in a stunning start to the Presidents Cup in Melbourne.

Woods cruised to victory alongside Justin Thomas but the four-ball format belonged to Ernie Els' team, who took a 4-1 lead on Thursday (December 12).

The Presidents Cup has been dominated by the USA, who entered the 13th edition at Royal Melbourne Golf Club having won seven successive titles.

Not since 1998, when the event was last staged in Melbourne, have the Internationals topped the United States.

Four matches in a row for the #IntlTeam.@CTPanGolf and Hideki Matsuyama take the final point on the opening day of the @PresidentsCup. pic.twitter.com/n3AT3Sxlzh

But the International team have boosted their chances of dethroning the USA thanks to Louis Oosthuizen and Abraham Ancer – who set the tone before Adam Scott/Byeong Hun An, Adam Hadwin/Im Sung-jae and Hideki Matsuyama/C.T. Pan followed suit.

With Port Phillip Bay nearby, players and fans were greeted by cool and overcast weather, instead of summer conditions, at the start of play.

While the weather was cold, USA captain Woods was red hot as the 15-time major champion produced a masterclass alongside good friend Thomas against Marc Leishman and Joaquin Niemann. 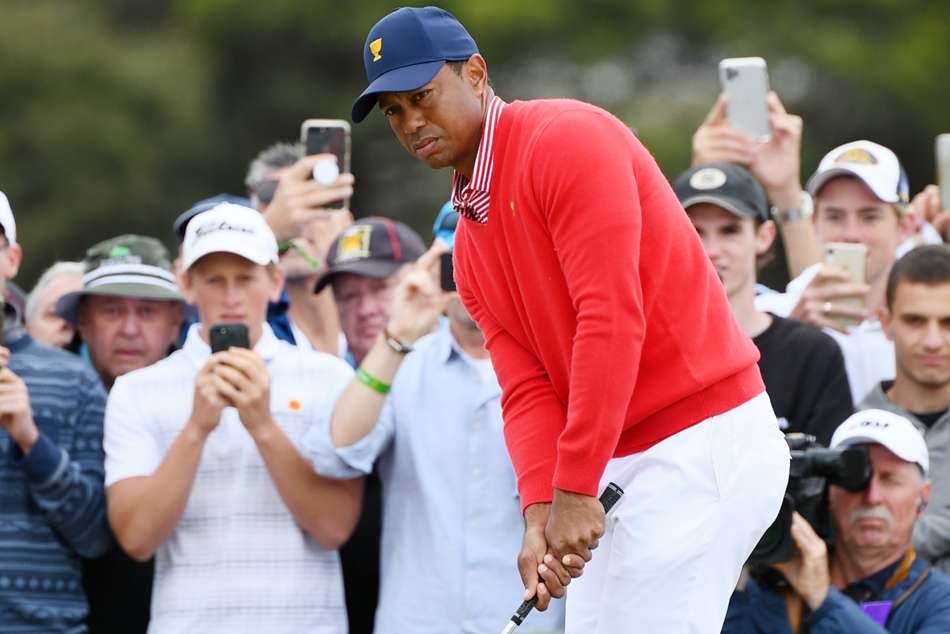 Woods had six individual birdies - including back-to-back to begin his four-ball matchup and a chip for birdie on the fifth hole - to give the USA a 4 and 3 victory in the opening clash.

It was the USA's first and only point of the day as the Internationals made a dream start - South African Oosthuizen and Mexican Ancer the highlight as the sun eventually broke through the clouds.

Oosthuizen and Ancer put former world number one Dustin Johnson and his partner Gary Woodland to the sword in a comprehensive 4 and 3 win.

Johnson's woes were headlined by a missed eagle putt on 11, which would have reduced the deficit to two and generated some sort of momentum.

Australian star Scott also had the locals cheering courtesy of his 2 and 1 triumph alongside An against Bryson DeChambeau and Tony Finau, while Hadwin and Im went 1up over Xander Schauffele and Patrick Cantlay.

Embroiled in controversy pre-Presidents Cup, public enemy number one Patrick Reed was silenced by defeat and heckles on Thursday.

Reed was penalised two shots for improving his lie in a bunker, hitting the sand twice during his practice swings at last week's Hero World Challenge, sparking claims of cheating.

Fans poked fun at Reed amid a chorus of boos as he teed off in Melbourne and he was unable to have the last laugh, the 2018 Masters champion - partnered with Webb Simpson - missing a birdie putt which would have halved the match against Matsuyama and Pan.