Panchkula, May 9: Mysuru’s Yashas Chandra hogged the limelight in round three of the TATA Steel PGTI Players Championship as he stormed into the lead with the day’s best score of seven-under-65. 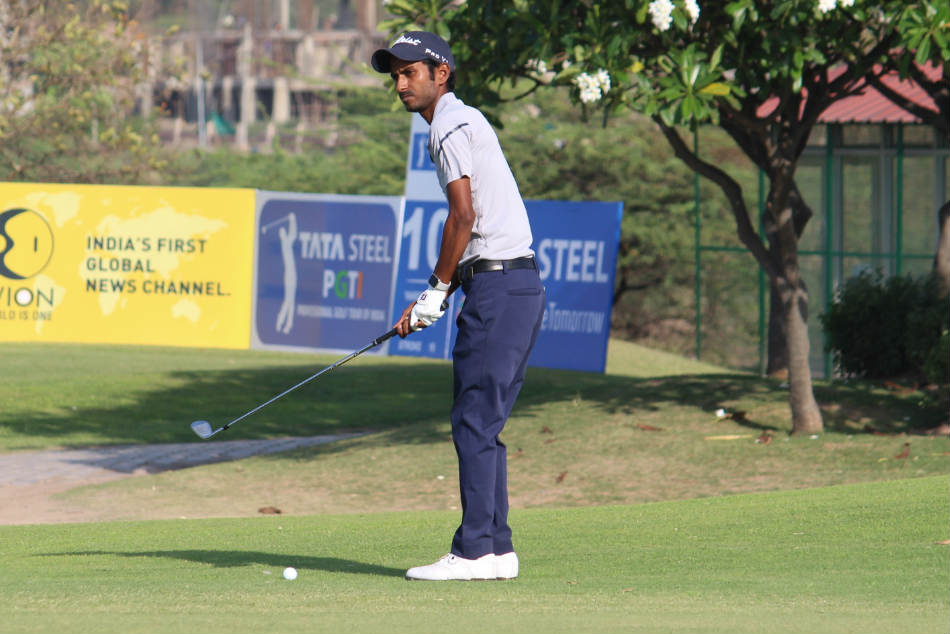 The 24-year-old Chandra, playing only his second season as a professional, jumped 11 positions from his overnight tied 12th to go one clear of the field at 10-under-206.

Twenty-two-year-old rookie Yuvraj Singh Sandhu (71) of Chandigarh hung on to his overnight second place to be hot on the leader’s heels at nine-under-207.

Interestingly, there is the prospect of witnessing a new champion on the TATA Steel PGTI on Friday, as both Yashas and Yuvraj are yet to win their maiden title.

Panchkula’s Angad Cheema, the halfway leader, shot a 75 on Thursday that saw him slip to tied fifth. He now lies three off the pace.

Yashas Chandra (67-74-65), currently placed eighth on the PGTI Order of Merit, had made a brilliant start to the week with a 67 that was punctuated with a record three eagles. However, Chandra dropped off the radar with an ordinary second round of 74 that placed him seven shots behind the lead. But he was back in the mix once again on day three following a 65 that featured as many as nine birdies and a double-bogey.

Yashas’ birdies on the first two holes were negated by his double-bogey on the fourth where he found the bushes with his tee shot. Thereafter, it was one-way traffic for the Karnataka golfer as his precise hitting and consistent putting earned him seven more birdies. Notable among Chandra’s birdies was the one on the par-4 11th where he drove the green.

Yashas, who has a runner-up finish, one other top-10 and three more top-20s to his credit this season, said, “My ball-striking, bunker shots and putting were spot-on today. I had 15 greens in regulation and made 27 putts. The momentum has been building up well for me this year. I’m growing in confidence with each passing event.

“I’ve so far not been able to put four good rounds together. I’ve shot at least one poor round in all recent events. I want to improve that aspect of my game.”

Yuvraj Singh Sandhu (71-65-71), who had produced the second day’s best round, continued to be in the hunt on the third day as a result of his 71 that featured four birdies, a bogey and a double-bogey. Sandhu was in a spot of bother when he made the turn at two-over. However, he pulled it back with three birdies on the back-nine.

Noida’s Gaurav Pratap Singh made waves on day three as he climbed from tied 12th to tied third thanks to his error-free 67. His tournament tally stood at eight-under-208.

Mukesh Kumar (71) of Mhow continued to be in tied third for the second consecutive day. Angad Cheema sank a lone birdie in exchange for two bogeys and a double-bogey during his round of 75. Cheema thus dropped four spots to tied fifth at seven-under-209. Om Prakash Chouhan (71) of Mhow also took a share of fifth.