Bengaluru, April 19: As weekends go, they do not get much better than that for Monster Energy Yamaha MotoGP rider Fabio Quartararo.

The Frenchman converted pole position into victory at the Portuguese Grand Prix as the MotoGP race saw some big names crash out.

Yet, Quartararo remained cool and calm at the front despite intense pressure from Alex Rins (Team Suzuki Ecstar). 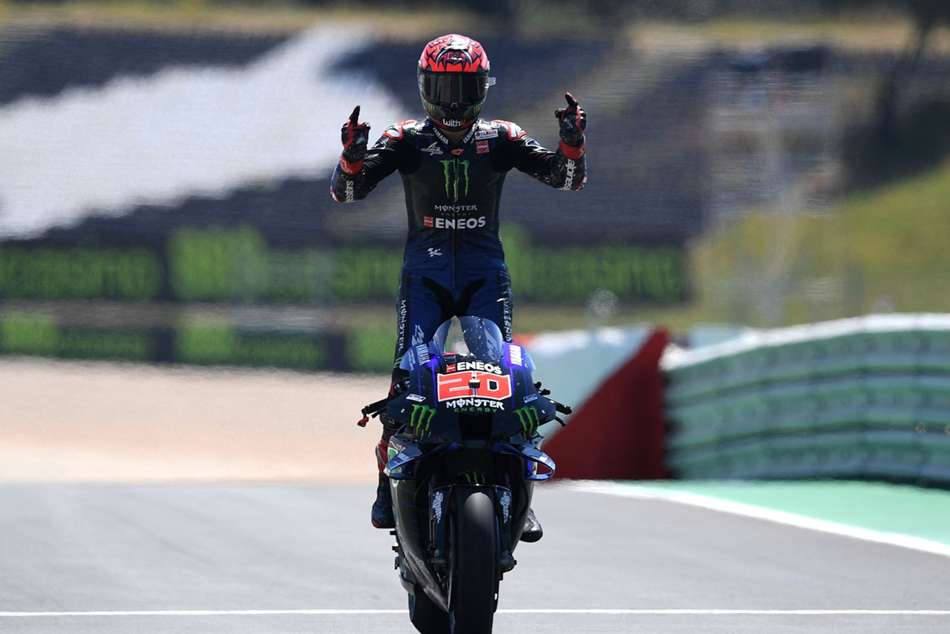 It was not to be for the number 42 though as he crashed out, with Francesco Bagnaia (Ducati Lenovo Team) then carving his way through to second and just holding off third placed Joan Mir (Team Suzuki Ecstar).

The returning Marc Marquez (Repsol Honda Team) battled through the pain to finish P7 after a few feisty exchanges.

The MotoGP caravan now moves to the Circuito de Jerez for the Spanish Grand Prox to be held on May 3.

The initial getaway from polesitter Quartararo was about as good as it gets, but in the second phase of the start, Johann Zarco (Pramac Racing) and Rins got the better of the Yamaha man and it was the Suzuki who actually grabbed the holeshot.

Zarco hit back to take over as the early race leader though, and Marquez made a searing start to move up and battle Jack Miller (Ducati Lenovo Team) for P3.

Mir made a typically great start and was up into the top five, and it was Mir vs Marquez again on the opening lap.

Before long, the reigning world champion shoved his GSX-RR up the inside of the Repsol Honda at Turn 11 for P3.

The podium battle, however, was still well on. Bagnaia was holding P2 and looking good, with Mir having Franco Morbidelli (Petronas Yamaha SRT) in his mirrors heading into the final exchanges.

With two to go, the trio were locked together but Pecco wasn't buckling, and fifth place Brad Binder (Red Bull KTM Factory Racing) was less than a second away from Morbidelli's rear wheel to boot.

5sec down the road, Quartararo cruised over the line to pick up his second win of 2021. Behind that, Bagnaia was just able to keep it pinned to the line to complete an awesome recovery from P11 to P2 after some qualifying heartbreak.

Mir could not get past the Ducati but he held off the Yamaha of Morbidelli by 0.179s to earn his first podium of 2021.