Abu Dhabi, Nov 23: Eight teams in the sixth edition of the Abu Dhabi T10 Season 6 will battle it out over a period of 12 days to lift the coveted trophy. The Abu Dhabi T10 - cricket's fastest format - will witness some of the best cricketers in the business making a beeline in the Gulf nation for the tournament.

A total of 33 games will be played in this year's tournament starting Wednesday (November 23). The final is scheduled for December 4 and teams will leave no stone unturned to win the top prize.

Season 6 promises to be better and bigger as two new franchises are making their debut in the tournament. Morrisville SAMP Army and the New York Strikers have been added into the mix from 2022. 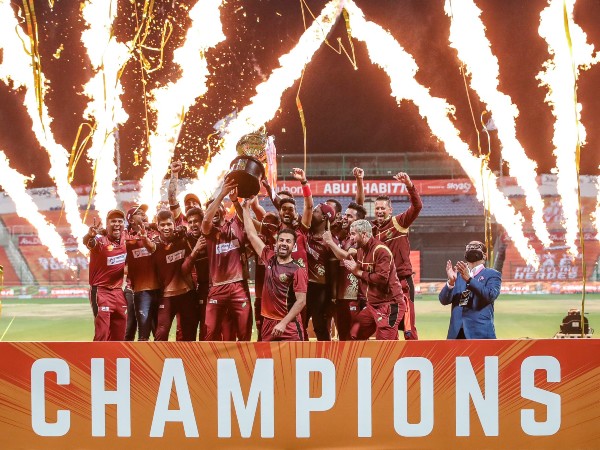 Season 6 of Abu Dhabi T10 will see cricketing stars like Dwayne Bravo, Alex Hales, Suresh Raina, David Miller, Wanindu Hasaranga, Kieron Pollard and Eoin Morgan among others. These players will be aiming to light up the evening at the iconic Zayed Cricket Stadium in Abu Dhabi over a period of 12 days. A total of 140 cricketers will be putting on a show to remember for the fans.

There will undoubtedly be no shortage of entertainment in the high-octane contests where fans are enthralled with the flurry of boundaries and wickets in the fast-action 90-minute contests.

The opening game will see the Kieron Pollard-led New York Strikers take on the Bangla Tigers captained by Shakib Al Hasan at 6:15 PM and the second game of the day will see the defending Champions Deccan Gladiators, powered by West Indian stars Nicholas Pooran and Andre Russel, square up against crowd favourites Team Abu Dhabi at 8:30 PM.

Format for League stages and playoffs:

The top two ranked teams at the end of the league stages will go head-to-head in Qualifier 1, with the winner advancing to the final. The losing team of the first qualifier will then get a second chance at the Abu Dhabi T10 trophy by facing the winner of the day's eliminator played between the sides placed third and fourth.

The first match will begin at 5:30 PM IST

The second match will start at 7:45 PM IST

On triple header days, the third and final match of the evening will start at 10:00 PM IST

In the Indian sub-continent:

Pakistan: Cricket fans can turn to the Ten Sports network and the TapMad network (OTT).

Bangladesh: The fans in Bangladesh can tune in to T Sports.