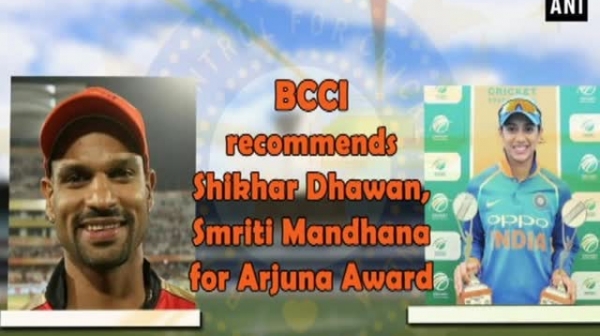 "We have nominated Shikhar Dhawan and Smriti Mandhana's names for Arjuna award," BCCI's acting secretary Amitabh Chaudhary said. The 32-year-old Dhawan is presently playing in the Indian Premier League (IPL) for Sunrisers Hyderabad and has been a regular across all three formats for India.

Ever since a debut Test hundred against Australia in 2013, Dhawan has been a crucial cog in the Indian batting line-up.

The 21-year-old Mandhana had played a key role in India reaching the final of the ICC Women's World Cup in England last year. Her prolific run this year has seen her grab a career-high fourth position in the ICC women's rankings.

In nine innings, Mandhana amassed 531 runs including five half-centuries, in the recent home series against England.

Meanwhile, the Board has given the names of Hardik Pandya and Dinesh Karthik as India's representatives in the World XI team that will play West Indies in a charity Twenty20 match at the Lord's on May 31.

Proceeds from the game will be used to rebuild and renovate five grounds damaged by by Hurricanes Irma and Maria in the Caribbean islands. The venues include the Ronald Webster Park in Anguilla, the Sir Viv Richards Stadium in Antigua, the Windsor Park Stadium in Dominica, the A.O. Shirley Recreation Ground in the British Virgin Islands and the Carib Lumber Ball Park in St. Maarten.

The West Indies are the reigning ICC World Twenty20 champions and will be led by Carlos Brathwaite and the side includes other top names like Chris Gayle, Marlon Samuels, Samuel Badree and Andre Russell.