Chennai, Nov 11: India scrambled a single off the last ball to seal a six-wicket victory and complete a whitewash of West Indies after Shikhar Dhawan made his highest Twenty20 international score in Chennai.

Nicholas Pooran (53 not out from 25 balls) blasted a maiden international half-century in an unbroken fourth-wicket stand of 87 with Darren Bravo (43no) to get the Windies up to 181-3.

That vastly improved showing with the bat proved to be in vain, but India made hard work of securing a 3-0 series win on Sunday. 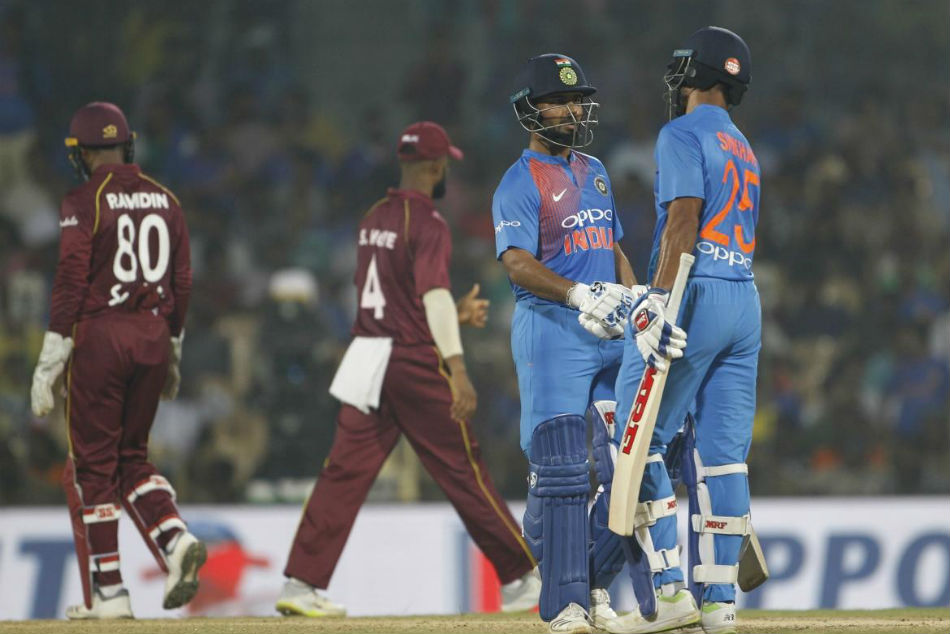 They were cruising with Dhawan (92 off 62) and Rishabh Pant (58 from 38) at the crease, but almost threw it away in a dramatic finale despite needing only eight to win off the last two overs.

Pant was dismissed in an excellent 19th over from Keemo Paul (2-32) and Dhawan holed out off the penultimate ball from Fabian Allen, but the spinner's misfield off the last delivery enabled Manish Pandey to make his ground.

It's a wrap. A lot of drama in the final over and #TeamIndia beat the Windies by 6 wickets.

Shai Hope and Shimron Hetmyer got the Windies off to a good start after Carlos Brathwaite won the toss, the latter bringing up the 50 partnership with a second maximum off an expensive sixth over from Krunal Pandya.

The introduction of Yuzvendra Chahal (2-28) did the trick for India, the spinner removing Hope with his first ball and also dismissing Hetmyer.

FIFTY!@RishabPant777 joins the party and brings up his 1st T20I half-century.#TeamIndia 152/2 after 16 overs, need 29 more runs to win this game #INDvWI pic.twitter.com/xhRAt7Rbw6

Pooran provided the impetus the tourists required after Denesh Ramdin departed, creaming the expensive Bhuvneshwar Kumar for back-to-back sixes down the ground before clearing the ropes with a switch hit off Chahal.

How good were @SDhawan25 and @RishabPant777 today. It's all about holding the nerve & WI weren't able to do that off the last ball. It's the win that matters at the end of the day and India as expected have convincingly won the series in style. #INDvWI

Bravo was also enjoying himself, both batsmen striking maximums in a poor final over from Khaleel Ahmed which went for 23 runs, with Pooran racing to his fifty.

Excellent knocks by @SDhawan25 and @RishabPant777 to complete a clean sweep and end the home season on a winning note. #INDvWI pic.twitter.com/FM1lmUrDtm

India were 45-2 in the sixth over after Rohit Sharma and KL Rahul came and went, but Dhawan and Pant put on 130 for the third wicket to put them well on course for victory.

Both batsmen hit sixes in an 11th over from Oshane Thomas which went for 18 and Pant struck Kieron Pollard over the ropes with a one-handed swipe as he brought up a maiden T20 international fifty.

Great effort by the West Indies to take it so close in the end but Rishabh and Shikhar really had a good time with some terrific hitting. Good to end the home season with a victory #IndvWI

The Windies looked deflated as Dhawan continued to find the boundary all too easily, but Pant lost his middle stump attempting to ramp a yorker from Paul, who conceded only three runs off the 19th over.

India needed just five off the last over but the tension rose when Dhawan lifted Allen straight to Pollard at long-on and a tie looked to be on the cards when Pandey could only prod the ball to the right of the bowler, who was devastated after failing to pull off what should have been a run out.