By Sajith B Warrier
Updated: Thursday, October 28, 2021, 10:33 [IST]
oi-Sajith B Warrier
Atletico Madrid has joined hands with other La Liga clubs in the virtual charity auction of jerseys.

Bengaluru, October 28: #LaLigawithLa Palma, the charity auction of the full complement of La Liga Santander and La Liga SmartBank club match-worn shirts to raise money to help those affected by the volcanic eruption on La Palma, has reached its halfway point.

Atletico Madrid, Athletic Club, and Granada CF shirts, which had yet to be put up for auction, were made available in the past weekend on Matchday 10 in La Liga, following their matches against Real Sociedad, Villarreal CF and CA Osasuna, respectively.

Real Madrid shirts worn by the players in their Matchday 11 clash with CA Osasuna on Wednesday (October 27) were the final batch to be made available, ensuring that all La Liga clubs feature in the #LaLigawith LaPalma charity auction. 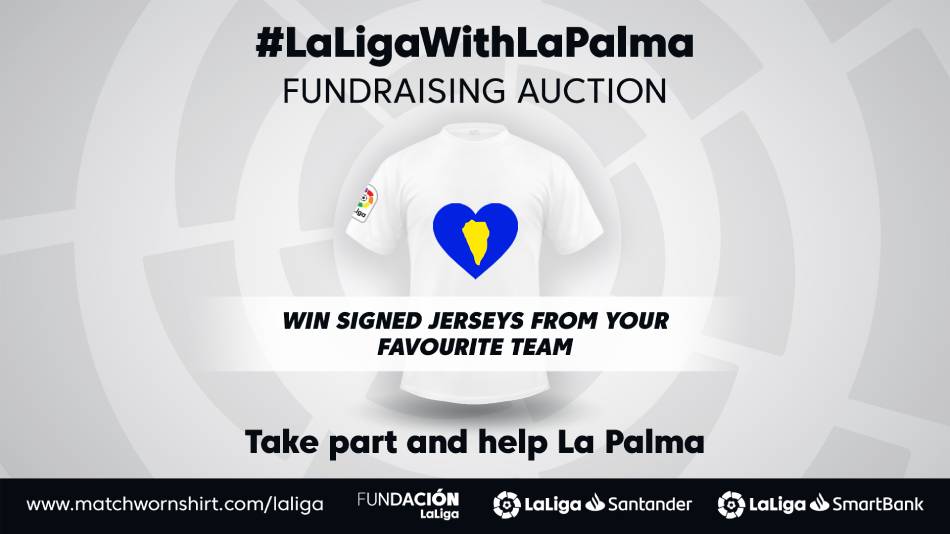 These four clubs have joined the virtual charity auction launched by La Liga on October 15 through the MatchWornShirt platform, which has extensive experience in similar charity initiatives.

The objective was to raise as much money as possible through the auction of shirts signed by the players that will play in games of La Liga Santander and La Liga SmartBank matchdays.

La Liga fans from around the world have demonstrated their solidarity since the auction began by raising over €100,000 in donations for the Island Council of La Palma to cover the medium- and long-term needs of those affected by the natural disaster.

The money raised will go to the Cabildo de La Palma - the Island Council of La Palma - to cover loses of those affected by the eruption of the volcano on the island.

🚨 Real Madrid has entered the mix! 🚨

In our latest update of the league-wide fundraising event for #LaLigaWithLaPalma, @realmadrid is now live! 👕

📺 Tune in to the game and place your bids as the boys in white take on Osasuna! #RealMadridOsasuna

With the #LaLigawithLaPalma initiative now at its halfway stage, the addition of shirts from these four clubs will provide a new boost in the fundraising.

The participation of La Liga Santander and La Liga SmartBank clubs has been crucial in ensuring that as much money as possible is raised in aid of El Cabildo de La Palma and which, it is hoped, will go a long way to helping all those affected by the La Palma volcano.

Since the Cumbre Vieja volcano erupted just over a month, many clubs have shown their support and solidarity with those affected through the roll out of special actions, charity auctions and kind messages of support on social networks such as those posted by Pedri, David Silva and Andres Iniesta.