Batshuayi out of chances to convince Conte

London, January 24: Michy Batshuayi has run out of opportunities to win over Chelsea head coach Antonio Conte and will be sent on loan if the club sign a new striker.

The Belgium international has found game time restricted under Conte, who has at times deployed Eden Hazard as a false nine when Alvaro Morata has been absent.

With Morata ruled out due to suspension, the former Marseille striker led the line in Chelsea's 4-0 victory over Brighton and Hove Albion on Saturday (January 20) but failed to find the net.

The Blues have been linked with a swoop for Roma forward Edin Dzeko and left-back Emerson Palmieri – a deal for the latter could be close with Kenedy sent on loan to Newcastle United for the remainder of the campaign on Tuesday (January 23) – and Batshuayi will only remain at Stamford Bridge if a replacement cannot be found.

Asked if Wednesday's EFL Cup semi-final second leg against Arsenal was a chance for Batshuayi to shine in Morata's injury-enforced absence, Conte said: "I don't know if this is the right time. I think that every player had their chance to play and to show me their value. Now I think I have to make the best decision for the team. 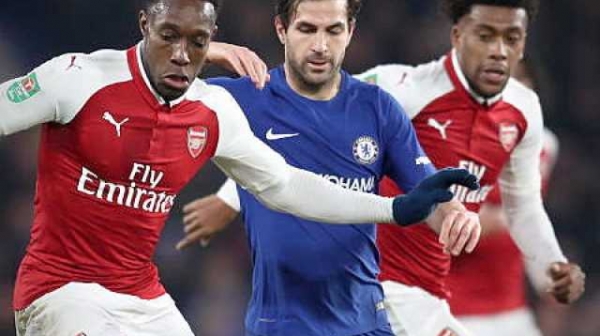 "We have to try to make the best decision every time for the team and to try to improve our players. Sometimes we are able, sometimes we are not able. But you have to do your best to reach your target.

"I think we have to try in every moment to be honest with our players. I repeat, I don't know if another striker will arrive for Chelsea. But, in this case, I don't want to send away any player.

"But a lot of times it's the player saying he prefers to go away to have the possibility to play regularly. Then you have to show you deserve to play every game."

Morata sat out Chelsea's 3-1 win over Huddersfield Town in December due to a back problem that has resurfaced in recent days.

Conte thinks recovering from what he hopes is not a serious issue is more important than the Spaniard coming out of a slump in form that has seen him score just twice in his last 11 outings.

"If you remember, in the past, he stopped himself for a problem in his back. Now this pain has come back. I hope it's nothing serious. But this is the second game that he stopped," Conte said.

"Now it's with the medical department to try and solve this problem and give him the opportunity to have a training session without pain. But this is the real problem now. Not that he's not scoring or that his confidence is down. For every striker, you can pass this type of moment.

"I hope to solve this problem very quickly because we need Alvaro. We need Alvaro's commitment."

Winners never give up because those who give up never win. pic.twitter.com/mB4g8MubGb