Mumbai, December 28: The seventh season of Pro Kabaddi League witnessed nail-biting finishes and a new team lifting the trophy for the first time - Bengal Warriors. While Bengal Warriors were crowned the champions after defeating a dominant Dabang Delhi K.C. in the final, all the twelve teams showcased some of the toughest matches on the mat and broke numerous records.

From Naveen Kumar's 21 consecutive Super 10's to Pardeep Narwal crossing the 1000 points mark; every match brought something exciting for its viewers. The organisers left no stone unturned to make this edition a grand success. 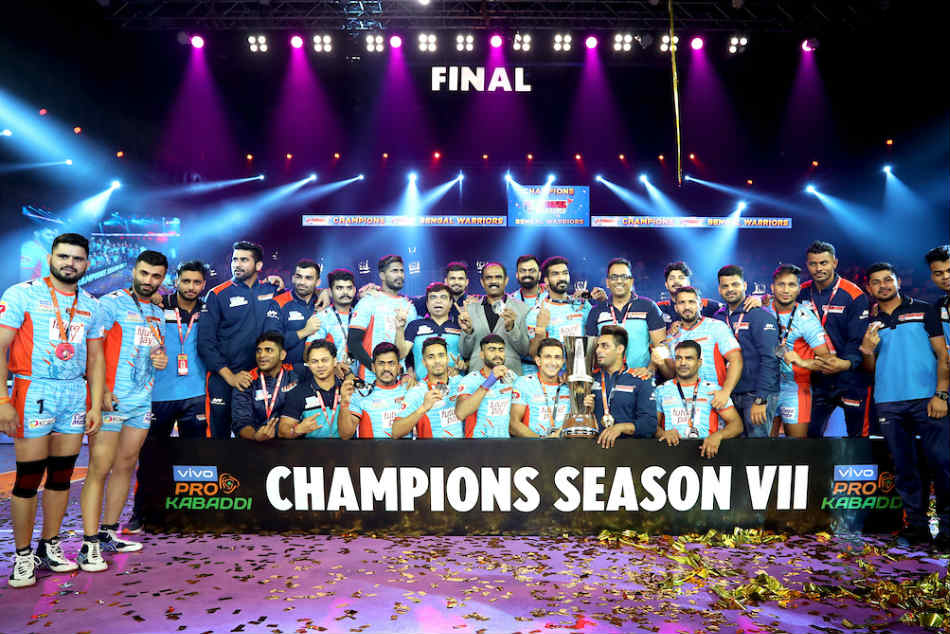 Players going under the hammer

The Pro Kabaddi 7 auctions ended on a high note with Siddharth Desai and Nitin Tomar being the costliest buys at INR 1.45 Crore and INR 1.20 crore respectively.

Among the foreign players, Mohammad Esmaeil Nabibakhsh was the highest-paid player at INR 77.75 Lakhs who then led his team, Bengal Warriors, to their maiden title.

PKL was back to its original calendar

Season 7 of PKL returned to the original PKL calendar of July-October, with an early start time of 7.30 PM. The double round-robin with a clear focus on achieving an equitable league table made season 7 of the league even more exciting.

This change in format led to a renewed interest among fans which kept all 12 teams in the running till the end. The curiosity and interest-driven through this format change led to an increase in viewership, and the change in timing led to a larger footfall across all 12 cities.

A staggering 328 million viewers tuned in to watch the Pro Kabaddi League Season 7 over three months keeping its place as the second most-watched sport after Cricket.

Depicting Kabaddi as a tough sport, the #IsseToughKuchNahi campaign conceptualized by Star Sports, highlighted key aspects that players build throughout the season which include strength, agility and absolute brute power.

The first TVC in the series starring Telugu Titans ace defender Vishal Bharadwaj was launched during the most anticipated clash between India and England at the ICC Cricket World Cup 2019 across TV and digital mediums.

The other films that followed, featured kabaddi heroes such as Rahul Chaudhari and Siddharth Desai.

The Record-Breakers of the season

Pro Kabaddi 7 proved to be the toughest yet with competition among the teams fiercer than ever and table toppers changing at regular intervals.

While many players took up the challenge and shone through, there were some who not only captured the imagination of fans but also had the numbers to show for their achievements.

‘Sportainment’ Extravaganza in the ‘Toughest Week’

Fans got a chance to shop for their favourite Pro Kabaddi merchandise, feast on sumptuous food and revel on foot-tapping music by award-winning Bollywood artists LIVE.

Fans were enthralled by the performances of music artists such as Darshan Raval, Kanika Kapoor and Amit Trivedi who performed during the 'Toughest Week' which included the playoffs and finals.

These performances added the element of entertainment for fans who turned out in large numbers to watch the performances which were followed by edge-of-the-seat matches.

The high-octane sports and entertainment mix ended with a nail-biting finish with Bengal Warriors claiming their maiden title this season.

Hotstar viewership soared to 1 million viewers during the final game between Bengal Warriors and Dabang Delhi.

The Future of Kabaddi

Since its inception in 2017, the Future Kabaddi Heroes programme has served as a platform for youngsters across the nation to showcase their kabaddi talent and earn an opportunity to be drafted into the players' auction pool for the Pro Kabaddi league.

The FKH programme took place across 12 cities with 2991 participants in its third season. 28 players who proved their mettle and battled to play amongst the best in the country after rigorous training and camp of two months were included in the auction for the seventh season of PKL.

The Players have access to an elite training team that includes professional coaches, physiotherapists and nutritionists who guide, support and monitor these young prodigies throughout the camp. Some of the notable talent from this brigade of players include - Naveen Kumar, Nitesh Kumar and Surinder Singh.