By Chitrangada
Published: Sunday, March 4, 2018, 17:45 [IST]
oi-Chitrangada
Mithun Perera with his spoils in Guindy on Sunday. 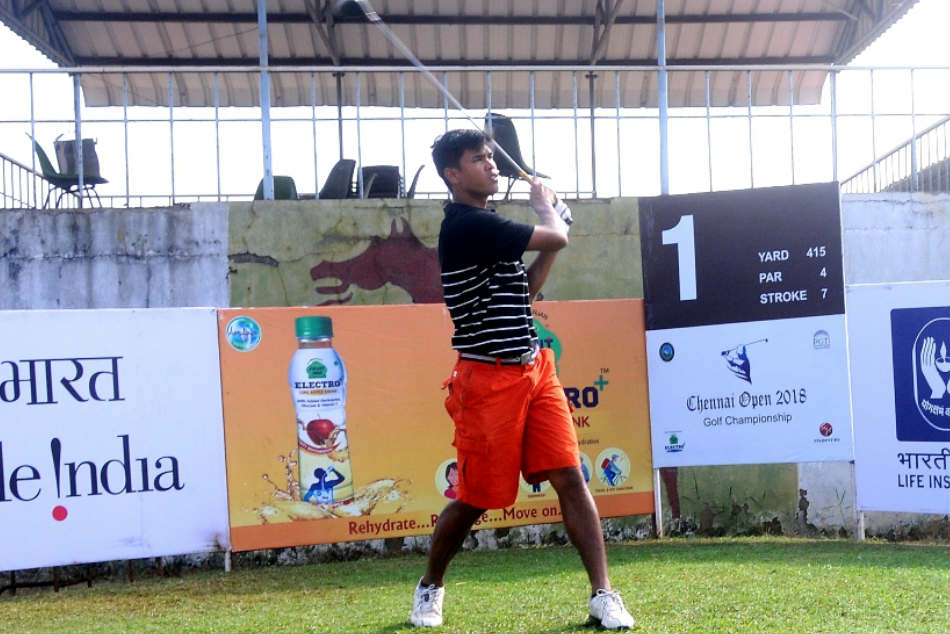 Perera, the overnight leader by three shots, came up with a tenacious even-par-70 in the final round to sign off with a winning total of 14-under-266.

Gurgaon-based Digvijay Singh posted the day’s best score, a scorching eight-under-62, to finish joint runner-up at 13-under-267 along with Mukesh Kumar (66) of Mhow, the winner of the last edition of the Chennai Open.

Mithun Perera (68-63-65-70) had an unexpectedly quiet final day as he managed only two birdies and two bogeys. But the 31-year-old came through after his closest rival, good friend and compatriot N Thangaraja’s (61-70-68-69) challenge faded away on the back-nine.

There was a four-shot swing against Mithun and in favour of Thanga over the first five holes that gave the latter a one-shot lead. But Perera played some solid golf that kept him on course even as Thanga made a bunch of errors to drop four shots from the 14th to the 16th. Mithun was back in the lead from the 15th onwards and saw it home despite a bogey on the 17th.

Perera, who bagged his sixth title on the PGTI, said, “I was really hungry to win and break my victory drought. This means a lot for me. My family has supported me throughout my lean phase and so have my sponsors. I thank them all for backing me through all these years.

“I had a shaky start today. But I played my normal game even after Thanga went in the lead. I kept in touch with the lead with a long birdie conversion on the ninth and a tap-in birdie on the 12th. I then got a little lucky when Thanga opened the door for me with that poor second shot on the 14th that rolled into the bunker and led to a bogey for him.

“Thereafter, my confidence was sky-high as I knew Thanga had literally given away the match after having a firm hold on it. I then just had one blemish on the 17th but kept my nerve to come through at the end.”

“The week’s been fantastic as far as my hitting is concerned. It’s a huge confidence-booster going ahead,” added Mithun, who took home a cheque of Rs. 4,84,950 and thus climbed from 21st position to second place on the PGTI Order of Merit.

Digvijay Singh (70-66-69-62) returned a sublime 62, the best score of the day, to climb 11 places from overnight tied 13th to tied second. Digvijay, a former Asian Tour winner, put together an eagle and seven birdies at the cost of a bogey.

Joining Digvijay in tied second was Mukesh Kumar (66-66-69-66), who had won at the MGC on the last three occasions. Mukesh worked his way up from overnight tied fourth after making an eagle, four birdies and two bogeys on Sunday at one of his favourite venues.

N Thangaraja, who was overnight second, finished in fourth at 12-under-268 despite his heroics on the front-nine on Sunday. Thanga was four-under on the front-nine in round four and looking good for the title. But he had a disastrous back-nine where he shot a three-over and lost out to fellow Sri Lankan Mithun Perera who was also his room partner for the week.