'World Championships is even tougher than Olympics,' claims Neeraj Chopra after silver medal finish in Eugene

Eugene, July 24: India's champion javelin thrower Neeraj Chopra created history once again as the reigning Olympic champion made a strong comeback in his fourth-round throw to clinch a silver medal at the World Athletics Championships here and claimed he will take the second position finish as he felt 'something' on his strapped thigh.

Chopra admitted that his comeback from outside medal position midway into the final was "challenging". He, however, also knew that a good throw was around the corner.

He was lying at fourth position after three rounds of throws, having opened with a foul before registering 82.39m and 86.37m in his next two attempts. He got his rhythm back with a big fourth-round throw of 88.13m, his fourth career-best effort, to jump to second place, which he held on to till the end. 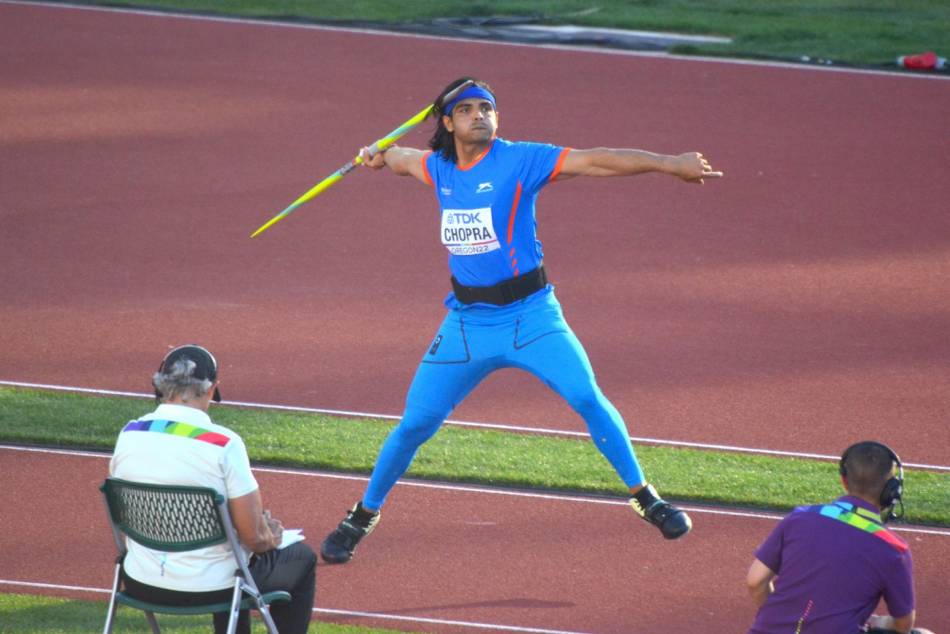 "Conditions were challenging, there was wind coming from the front. It was a tough competition with very tough competitors. It was challenging for me, but I was confident that a good throw will surely come.

"I was making the effort (in the first three throws) but it (big throw) was not coming. It was challenging but good that I made a comeback," the 24-year-old Chopra said during a virtual press conference.

"I am happy to have won silver, the country's first medal in World Athletics Championships after 19 years, I will take it. World Championships is even tougher than Olympics, its record is higher than that of Olympics."

"I had strapping (on the thigh). I will know the status tomorrow morning because my body is still warm after the event. I hope there should not be any issue for the upcoming events, Commonwealth Games."

Defending champion Anderson Peters of Grenada won the gold with a massive throw of 90.54m. He was a class of his own in the final as he had three massive 90m-plus throws -- in the first two rounds and the last attempt. Olympic silver winner Jakub Vadlejch of Czech Republic took the bronze with 88.09m.

The Indian fans are used to watching Chopra having big throws in the first two rounds but it was a different scenario in the World Championships final. Chopra had won gold in Tokyo Olympics last year with a second-round throw of 87.58m and just needed a first-round effort of 88.39m to qualify for the finals at second place here.

His trademark big smile was back after the fourth round throw as Chopra, the son of a farmer from Khandra village near Panipat in Haryana, did the 'calm-down' gesture and showed the victory sign with his right hand.

Chopra had won Indian athletics' maiden gold in the Tokyo Olympics last year. He is only the second Indian to have won an individual gold in the Olympics, after shooter Abhinav Bindra, who clinched the yellow metal in 2008 Beijing Games.

Asked if he was feeling the pressure of being an Olympic champion heading into the World Championships finals, he said, "I never felt that kind of pressure. My focus was always to give my best, and improve upon my best. "Of course, I was in a challenging position (after the third round) but I was confident that I will have a good throw somehow. I kept trying and it came.

"An athlete cannot win a gold every time but we have to keep trying and give our best. I have learnt a lot from the challenging situation today, and I will work for improvement. "I have won gold at all levels except this World Championships silver. I will try to change the colour of medal (to gold) in the next World Championships in 2023 (in Budapest). The other competition I want to win gold is the Diamond League."

He said he is having a healthy competition with Peters whom he is going to face again in the Commonwealth Games beginning in Birmingham on Thursday. "Peters is doing well, he has thrown more than 90m quite a few times this year. It is good for the sport. I am happy with the rivalry. I have beaten him also. It is a healthy competition and a challenge for me. I have to improve myself.

"Every day is new and different. The way we may want to perform, it may not happen exactly that way. It depends on the day. I don't need to make any changes, I have my technique and I need to improve upon what I am doing."

When asked whom would he dedicate the silver medal to, Chopra said, "Anju Bobby George madam won India's first medal. Everybody who has played a part in my success and those who are praying for my success, I would like to dedicate to them."

He said that he spoke to Pakistani athlete Arshad Nadeem who finished fifth with a best throw of 86.16m. "I spoke this to him after the end of the event and told him that he had performed well. He said he had problems with his elbow. He was not doing well at the start so I told him he made a good comeback."

AFI President Adille Sumariwalla lauded Chopra for his remarkable comeback after being out of the medal position. "The wind was not kind to the throwers. But the champion that he is, he made a comeback from an outside medal position. His performance is better than that of Olympics," Sumariwalla said.

"We have six finalists for the first time. Out of the five, if three had done their personal best, they would have got a medal. "So, Indian athletics is making progress, may be slow progress but making progress."